Land of my fathers 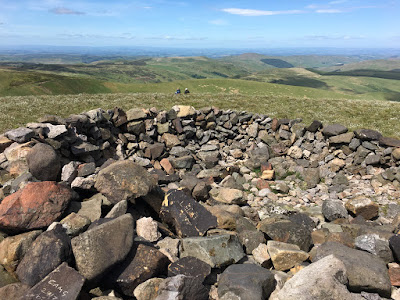 Russell's Cairn on the summit of Windy Gyle.

Next winter, it will be three decades since I came to Wales; more than half my life, and a long time more than the 'two or three years' I'd planned to stay. I love it here and suspect it's where I'll see out my time. But the true land of my fathers is Northumbria, at the edge of England, where the sky is sharper, and the sun rises over the sea.

I wrote recently of the backpacking trips I made as a student. That was in the early Eighties, around the time I became closer to my maternal grandfather. He too loved the outdoors, and though in his seventies, came with me on many trips to the mountains. I remember in the summer of 1981, climbing the Simonside Hills on the morning of the Royal Wedding, where we met a group of similarly lost souls, looking for somewhere to escape the madness. And I remember too, around the time I returned from university, me showing him the route to Windy Gyle.

Last week I was there again; this time with my son Daniel. He's just finished his degree and wanted to talk about his plans. I suggested we go to the hills but chose the route without any conscious nostalgia. For all that, it never fails to surprise me, how our histories have a habit of repeating themselves - as we set off, I packed my bag with the same OS map I'd used thirty-five years before.

The walk begins about as far into the Cheviots as you can reach by road. To get there, you must first pass the Rose and Thistle at Alwinton, where Sir Walter Scott wrote Rob Roy. There were cyclists heading our way, waving us through as we drove by the banks of the upper Coquet. It was warm for early morning, only thin trails in the sky; the deepening valley stirring memories of times that that had shaped me, and yet lain dormant for years. 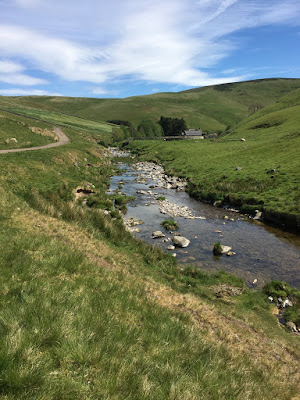 Not everything is the same as it was: there's now a car park at Barrow Burn and new information signs from the National Park - but otherwise, this place feels timeless. Our route follows the drover's road to the border fence, briefly joins the Pennine Way, ascending to Russell's Cairn on the summit. Like much of the Cheviots the path is soft underfoot, the climbs more rounded than steep; a view that relies on the changing light to give form to its barren beauty.

We reach the cairn in less than two hours and drink greedily from our flasks. My thirst reminds Daniel of a trip ten years earlier, when we had walked together along the Preseli ridge back home in Wales - it was he who stumbled on the hidden stream that allowed us to camp by the bluestones at Carn Menyn.  The story of that journey - and how it helped me see Daniel anew - became the opening chapter of my book, Counting Steps.

You're not going to write about this as well, he asks?

We returned down the valley past Row Hope farm, drinking our fill from the clear water springs. There were skylarks above us, small heath butterflies in the dun grass, and two ravens patrolling the slopes to our left. I check the map and the words on the battered paper invoke a subconscious smile: Headless Clough, Mosie Law, Rough Knowe, Black Braes...  These are names and language of the northern fells; a lexicon that was once as familiar to me as the Celtic equivalent of where I live now. 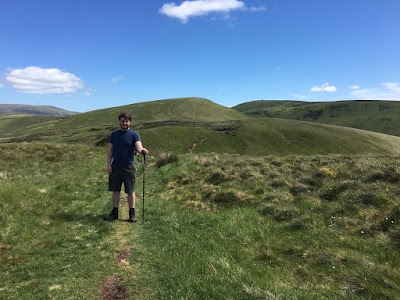 But I sense there was more to my involuntary smile than a recalled familiarity. The landscape of our childhood - or more particularly, the place where we 'come of age' - has a profound hold on our sense of self. I'm sure that's why so often we define ourselves in relation to where we were born; why so many of us, despite our peripatetic lifestyles, seek to return 'home' in later years; and why, on the occasions that we do, we feel a depth of belonging that transcends the here and now, connecting our presence to the past, and even to lost generations.  As I've got older, I've come to realise, that what in Wales they call Hiraeth, is not unique to the Welsh.

Ironically, my own father did not like the hills, preferring the town, or at a push, the sea. But in fairness, he too stayed resolutely a man of his place. One of his few questions, when I visited before he died, was to ask how it had felt to cross the River Tyne - true Geordies cry, he'd said.  I lied, (though not with intent), telling him that home meant nothing to me now - I'd moved away and wouldn't be coming back.

If only life, and the paths we take, were that simple. 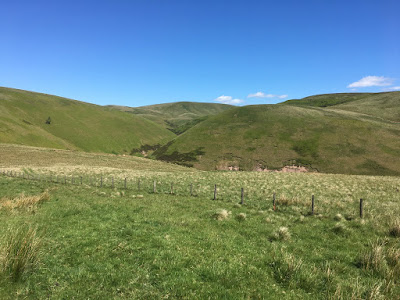