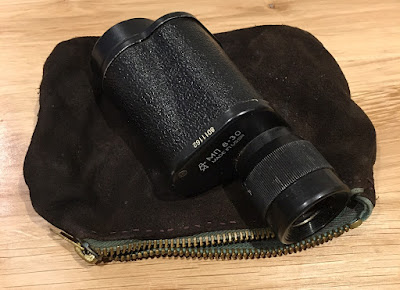 Two days ago, at the summit of Pen y Fan, I reached into my rucksack and took out a small leather pouch. Inside was an old Russian monocular which magnifies at a paltry 8x30; the lens was dirty and the focusing wheel so stiff it required two hands to turn. I've no certainty of the make (Zenith possibly?) but its serial number is 8011162, and oddly, I've known that by heart for thirty seven years.

I bought the monocular when I was coming up nineteen. It was my first summer as a student and, in between signing on, I spent it backpacking the long distance paths of Northern England. I couldn't afford a proper case so made the pouch myself, hand stitching the brass zip into the mock suede fabric. That long July and August it came with me on Hadrian's Wall, the Pennine Way, and from coast to coast.

Monoculars were rare back then - they're hardly commonplace now, but this was pre-internet and I remember being delighted to find one in a second-hand camera shop. I think it cost me about £8.00. The reasons for buying a monocular were two-fold: firstly, they were recommended as a weight saving tip by the Backpacker's Handbook; more importantly, I have only one eye that focuses, so binoculars are of limited use.

After that summer I used the monocular less frequently, and more recently it has gathered dust, surpassed by a newer model that offers better light capture and magnification. Jane considers the original to be useless - she says if reason had its way, I'd have sent it to the junk shop years ago. And she'd be right - if that is, our possessions were all and only about utility.  Instead, it has stayed in my desk, beside the pens and brushes and old sketchbooks that hold memories beyond any logical worth.

Recently, I had my eyes tested.  I've used reading glasses for a decade, but two years ago I noticed my distance vision was weakening too. My optician gave me specs for driving and I found myself turning to them more and more. This time round, I asked if I could wear a contact lens instead - and it turns out I can.

Three weeks later and I'm still pinching myself when I look at the landscape!  It's not just the extra clarity; by correcting a slight astigmatism the new lens widens my peripheral vision, and with only one functioning eye, that makes for a massive improvement. The other day I compared it to the difference between an analogue TV, and a 50-inch widescreen with High Definition!

But if there's a downside to wearing the contact lens, it's that my reading glasses are now too strong. My optician suggested I buy some cheap readers. You won't need expensive lenses, because the contact will already have corrected the shape of your eye. You might find your old glasses work well - if you still have them that is.

And that's how I found myself sitting at the top of Pen-y-Fan, holding my old monocular to a newly lensed eye, watching the walkers on the ridge. The view, like memory, was blurred at first - but after a while, it came into focus. A group of young people were nearing the plateau, most of them wearing university hoodies.

As I was readying to go, they asked me to take their photo and to, my surprise, a girl passed me a camera rather than a phone. You need to press the button quite hard, she explained. After handing it back, she must have sensed my thoughts.  I know it looks a bit rubbish, she apologised,  but I've had it for years and it still takes good pictures.

Sticks in each hand, I smiled as walked down the hill. 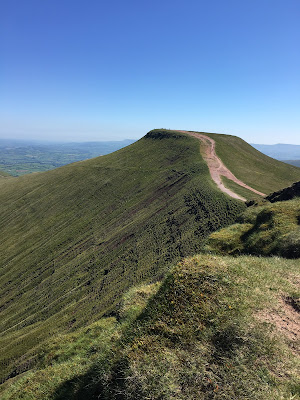 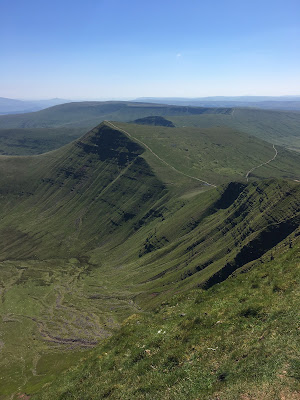