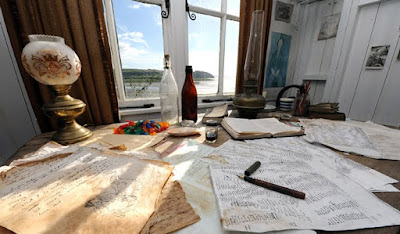 'In my craft or sullen art' - the desk of Dylan Thomas

For the last three months I've been lecturing at the University of the West of England, teaching copy writing and professional practice. It's been as much a journey for me as my students, and a tonic, in the twilight of my career, to feel I have something to offer.  But more than that, it's been a period of self reflection, for if I've learned  one thing about teaching undergraduates, it's that it requires looking as deeply into your own practice as theirs.

Often I start my lectures with a video, illustrating a notion that's caught the eye or snagged my memory. In part, I use these to settle the class, buying time for the inevitable stragglers; more substantively, I'm offering a sideways look at the creative processes, with a hint at its relevance to writers. Most times there's a tangential discussion, though occasionally I sense the gears and levers of my students' minds wondering if I've lost the plot.

Over the weeks I've shown clips of Picasso at work, excerpts from documentaries, wildlife films, jazz improvisations, poetry readings...  At my last lecture we watched Damien Hirst discussing the paintings of Francis Bacon - one of my more esoteric selections. Yet despite a few blank looks, I was delighted when a student came up after class and said, I'm beginning to see where you're coming from.

In many ways I learned to write through pictures. Not literally of course, but in the way that for words to have depth of meaning, we're required to pay close attention, the same is true of painting. As Hirst points out, Bacon's works are much greater than our first impressions. Look closely at his images - so immediate and visceral - and you'll find they dissolve into thousands of marks: each a deliberate placement, whether delicate or violent, carefully considered, worked and reworked...

This is the craft behind the creation. And it comes less from technique than it does from care. More than any other advice I've given my students, is that they should pay attention to the detail. And by that I don't mean checking for typos; I mean being precise, taking heed of the words - shaping the sounds - to the point of exhaustion if necessary.

How long do you think it took to write that last paragraph?  And how many edits would you guess I've made?  If I told you in minutes I'd be lying. And as for the changes - as I type this sentence I've gone back twice more. In the video of Bacon's paintings, Hirst draws attention to the image of an ear that's been overpainted so often the layers of pigment have congealed into sculpture.

I sense that all discovery is like this - a combination of creativity and craft.  Creativity is what consciousness is to philosophy: something we experience and yet can't pin down.  Craft, on the other hand, we can see and learn, and through long practice, even master. I was once rather sniffy about the idea of reworking, believing some 'deeper inspiration' to be the vital ingredient. But this is naive; a misunderstanding of what craft is, and the role it plays.

In seeing craft as care rather than effort, we gain a different perspective. We also learn that 'process' is not only necessary for the communication of our ideas, it's a gateway to creativity itself. In this respect, I suspect that most epiphanies - be they in art or science - come as described by the mathematician Andrew Wiles, 'after stumbling round in the dark'.

For me, the practice of refinement is as critical as ever - be that as a copy writer, essayist or blogger.  First drafts are interminable: the movement from notion to form, at times glacial and always fractious. But to sense the shape emerging, to respond in turn - and to do so with truth - is the greatest joy in writing.

I hope my students feel that too, and come to see it all around them.
Posted by The bike shed at 9:47 AM