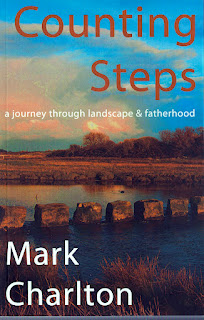 My first book, Counting Steps - a journey through landscape and fatherhood, was published by Cinnamon Press.  A collection of themed essays, the book is a response to the delight I’ve found in fatherhood and landscape; to the people I love and the places I find myself returning.

At times the essays are deeply personal, but hopefully, they carry a universal message too. I was fearful my wider family may have been hurt by some of what I’d written, particularly about my father - but pleased they saw the bigger picture. For ultimately, this is a book inspired by joy, about the power of love and landscape; the ability to come through.

Counting Steps is dedicated to my wife Jane and our three boys.

Below are two extracts.

I suppose you have to start somewhere.

That said, you wouldn’t choose the car park below Cerig Lladron as the most inspiring place to begin.  Deep ruts in the mud make parking difficult, glass from shattered windscreens litters the ground; someone has set alight the information board.  Its charred and jagged edges mirror the granite spikes that puncture the rounded peaks beyond.  Daniel surveys the bleak moorland; he looked unconvinced.

The Preseli Hills have been a constant presence for the fifteen or so years I’ve lived in Wales, their gentle curves forming the backdrop to my garden. And yet, I have never walked the length of the main ridge.  Perhaps that’s because I live in Pembrokeshire, where all eyes are fixed on the coast, seldom registering the subtler possibilities that lie inland.  Or perhaps it’s because the ridge is so available; its proximity leading to complacency and before long any sense of urgency has slipped away - it will be there tomorrow, next week, next year.  Or maybe it’s because the logistics are awkward.  It is a long linear route, a drop off one day, a pick up the next – there are always softer options which provide enough excuse to assuage the mild sense of guilt.

I am thinking all this as I watch Daniel struggling with his rucksack, the straps flapping in the wind. It is ill packed and the weight of the load pulls him backward, but I resist the urge to rearrange it.  He is thirteen and growing out of his body: his shoes three sizes bigger in a year, his trousers too short and his nose too large for his face.  And yet his hair is wispy and frail, his skin all freckles, turning to spots.

He waits for me to lead over the stile, kicking his feet in a pool of petrol streaked water that reflects the gathering clouds.  But there is more to his awkwardness than the threat of rain.  I’d spent most of the journey here ranting at him for smearing mud over the newly cleaned car.  ‘Teenage incompetence,’ I’d called it – it’s become a regular phrase in our house – ‘Why can’t he just think for once… I’ve half a mind to call it off...’  I’d muttered on like this, Daniel silent in the back, until in her beautifully gentle way, Jane, had helped me let it go.  ‘Don’t spoil your time with him,’ she said, ‘he wants so much for you to enjoy this walk.’

If I describe the starlings to friends the response is always similar. There is mention of their flight, the swirling forms; comparisons to kaleidoscopes, oil on water, even Disney’s Fantasia. It seems we are fascinated by their synchronicity; the apparently random yet tightly choreographed swarming, the swoops and falls and joy and delight of it all.

And most have a story to share. We’re aware of starlings gathering in cities, under piers, on marshes and reed beds; one colleague talked of the flocks she’d seen on the American Plains. Starling roosts are a seasonal staple of television shows like Spring Watch and Countryfile. On the Somerset Levels they are promoted as a tourist attraction.

Yet when I listen to these reports they don’t resonate.  It took me a while to realise why, though the answer should perhaps have been obvious. We tend to view starlings from afar. Indeed any description of the swarming presupposes we are at a remove.

What I so loved about Plumstone was the opposite.

To visit the roost that winter was to be amongst the birds. At Plumstone the starlings fly over your head; on a heavy night they will literally touch your hair. There will be hundreds by your feet, on the wires and fences, more on the barns and hedges – drinking from pools, chattering on perches, flushed skyward by the raptors. There’s a pair of resident goshawks that make their kills above the wooded break; a peregrine once stooped yards from where I stood, barrel rolling to clasp its prey from below.

Then there’s the stream of chatter, and the overpowering stench of guano. Three months of a million plus birds and the copse stinks of sweet lime. If I walked in the trees I could stand under the roost, the sky reduced to starlight by the bursting branches, my boots sticky and my coat peppered with droppings.

The following summer I took to watching birds at the coast. I never did that list-ticking thing, though I’d often drive to Strumble to look for auks, or walk to St David’s Head to watch the gannets diving off Ramsey. I liked best to go in the evening when occasionally there’d be shearwaters, flying low over the sea on their return to Skomer.

But all this was at a distance.

I missed the black shroud of the starlings, the closeness, the calling and the smell. By the following November I was back at Plumstone, looking for smoke over Arnold’s Hill.

Counting Steps is available from any good bookshop, Amazon, Cinnamon Press, your local library, or direct from the Bike Shed - just send email requesting a copy. 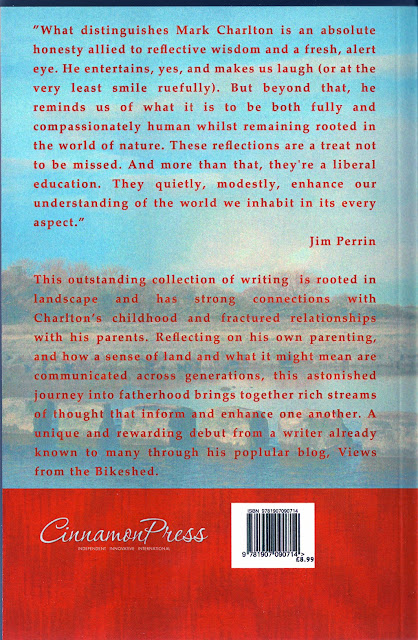