In Meet Me There, ten Cinnamon authors talk about writing to celebrate the press's tenth anniversary. 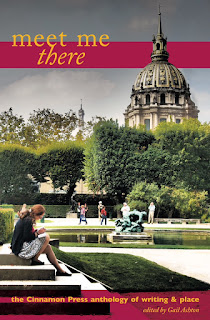 From the places that inspire to how associations of place become important in literature, the writers present work in which place plays a central role, before discussing tools and techniques on writing about place, or offering creative writing tips and short workshop exercises.

My piece recalls the day I took my son to university in Newcastle, about as far away as it was possible for him to chose to study - and yet, my 'home' town. It was a day of returning and letting go... with an unexpected ending.

Read the opening from my piece below:

A Sort of Gravity

Twenty years ago we took a holiday to the Beara peninsula, the middle, and most remote, of the three fingers of land, reaching out to the Atlantic on the South West tip of Eire. It was March, and the boys were toddlers.

Actually, that’s not right.  Daniel was a toddler; Mike was still kicking his mother’s belly and wouldn’t come screaming into our world for another three months.

Quite why I’d suggested we visit Beara I can’t remember.

I think it was the idea of being on the edge, beyond the tourist trails. I had notions of brittle skies and windswept bays, walking on the cliffs in the day; and of nights drinking whisky and Guinness in bars thick with smoke. It would be romantic, I’d said to Jane, and cosy too.

As it turned out, it was bitter. And in March, largely closed.

My abiding memory is the two days Jane and I spent in bed, so sick with food poisoning we took turns, between vomiting, to feed and change Daniel. I remember lying on the sofa, as he crawled round our rented bungalow, rain seeping through the inadequate seals of the patio doors.

But perhaps I have that wrong too.

For it’s entirely possible I’m confusing the events with something that happened another time - and that what I’m doing is to remember remembering, years of which morph the details, like Chinese whispers, such that the only ‘truth’, which remains, is a recollected feeling.

A feeling more certain than any chronology or facts - a lingering sense of place.

Eighteen years later and Daniel is hovering in the kitchen for longer than usual, a piece of toast in one hand, a kit-kat in the other.

He stuffs the latter in his pocket as he turns to me. ‘You know Dad, they say there’s a Goldilocks zone for universities.’

He bites the bread and continues to mumble.

‘Not so far that you don’t get away, but near enough to bring home your washing.’

I ponder this as he opens the fridge, examines a block of Wensleydale and casually breaks off a chunk.

‘Where did you hear this?’

For Daniel this is quite a reveal. He’s not spoken much about his university choices and I wonder what he wants to tell me, so I probe.

‘How far does this zone extend?’

‘Between a hundred and two hundred miles. Most of my friends are looking at Cardiff or Reading – those sorts of places.’

‘It depends on my offers.’

‘Of course, but where would you most like to go?

He glances at me and reaches for a packet of biscuits.

‘Well, where in this Goldilocks zone are you thinking of going?’

“I’m not,’ he replies, stuffing the biscuits in his bag and heading to the hall. ‘I want to be more independent.’

There’s a blast of air as the kitchen door swings and the front one slams.

Daniel has confirmed his decision.

‘You want to go to Newcastle?’

I visualise a line a map but know already that aside from Scotland, it’s the furthest university from home he could have chosen.

Later that morning, I wonder if Falmouth might be a longer trip by road and consult Google maps. The dogleg round the Severn adds a hundred miles - but the distance doesn’t compare.

Of all the places…