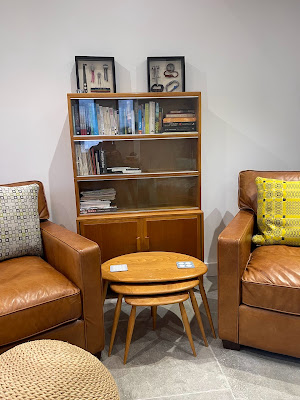 Yesterday, on the turn of the year, I decided to tidy our back room. It's one of those awkward spaces,  useful and yet not quite what it could be; a thoroughfare from the front to rear gardens that we use for coats and boots and anything that might make the cottage look untidy. When I bought this place it was no more than an earthen floored shed; decades earlier it had been used to keep pigs.

None of which is particularly relevant, except for the process of relooking and sorting —the putting of our lives in order and hoping they might stay that way; which of course they won't.

But that doesn't mean we shouldn't have the patience to try.

In the corner of the room was a mid-century bookcase that I bought when I was twenty-one years old for my first ever house. I'd seen it for sale in a newspaper small ad of the type that nobody bothers with these days. And I remember the elderly lady who sold it to me: she was small and solid with deep-dyed hair and bright features that hinted at the beauty in her youth. She was almost seductive and insisted on my having tea and offering me a small table she was selling too. For years it was in our summerhouse until (to my deep regret and in a moment of unthinking) I disposed of it as clutter.

Why do I remember that encounter so vividly?  And why do I recall it so often? I must have forgotten a thousand equivalent meetings, and yet, I could show you where her flat was in Cullercoats, overlooking the sea in the north east of England. I could tell you with confidence that the bookcase cost me fifteen pounds and that I gave her an extra two for the small table. If I took a moment I'm sure I could bring to mind the smell of her perfume. It seems our minds hold onto memories as randomly as we do the objects we own.

And as I get older, the two become almost indivisible.

The bookcase has been with me in all my houses since that day, even if, like the space between our gardens, it's not always been fully utilised or appreciated. For the last year, it's been squeezed lengthways between a wall and a wardrobe that stores our coats; when we pulled it out yesterday, its shelves were crammed with a plethora of 'stuff' that hadn't quite got another home. Someone in a more objective mood would've taken the lot to the tip.

But then, they wouldn't have been looking closely. For despite its utilitarian appearance, the cabinetry is precise and cleverly designed. To help its movement and assembly, the shelving dismantles and fits together with a jigsaw-like accuracy; the panels are subtly coloured, the hinges smooth, the doors satisfyingly snug. It would be easy to mistake the workmanship as coming from a famous maker like Ercol or G-plan, but in fact, it's anonymous. Which I rather like, as it avoids the temptation to put a price on something whose value isn't about money at all.

That said, I'm told that mid-century furniture is enjoying something of a renaissance. It seems my taste of forty years ago is finally becoming trendy. As we dusted it down and cleaned the glass my teenage son said,  I guess this is going in your fancy new study?  And he was right; it fits perfectly too — between the chairs where I like to read and the pebble tables which though an iconic design irritate me a little with their fiddliness.  Oh, I do so wish I had that table I threw away.

Coming to my study this morning I had no intention of writing about this. But then yesterday I had no idea that the bookcase would find its home and feel so appropriate at last. It's as if the sorting of objects helps to clear our minds too, suggesting possibilities and settling ideas into place — not dissimilar, perhaps, to the way we store books on shelves; an ordering of our memories, of significant moments... the putting of our lives on display.