I first saw vultures when I was twenty-six years old. It was the year that Stephen Roche won the Tour de France and I cycled across the Pyrennes on a tandem with Rebecca. For most of our trip, we carried little more than a change of clothes, our passports and a couple of baguettes stuffed in the saddlebag. We were young, fit, and unphased by challenges I wouldn't look at today.

At the top of the Col d'Aubisque, there's a section of tarmac that's cut into the cliffs, creating a suspended belvedere road with a vertical drop on one side and a distinct absence of barriers between you and the abyss. It's about the worst place I could think of to suffer a puncture or to lose concentration after toiling to the top.  As we rode over the summit, they were circling above us.

And I remember our stopping to watch them, marvelling at the ease with which they rode the thermals, gliding across the valley that had taken us all morning to climb. There's an elegance to the flight of vultures that transcends that of any other bird of prey, and which ironically, in its effortless grace, strengthens our stereotype of the species.

It was two decades till I saw one again. I know this for I remember the day with photographic clarity. We'd been walking with the boys in the Aravis mountains; it was scorching and we'd taken a route too long and too steep for Jane who was pregnant. That evening when she went to the loo, the bowl filled with blood and her face with tears...

She needed time alone, so I rode my bike up the Col de la Colombière. I wanted it to hurt, pushing every sinew; screaming at the mountains... and their indifference. As I pedalled the last incline—without elegance or grace—there were two Lammergeiers wheeling in the sky. These, the largest of the European vultures, have learned to drop bones onto rocks so they shatter into pieces small enough to swallow.

They are, I think, the most magnificent of birds.

Lammergeiers are also rare and have only recently returned to the Alps. I learned later that the ones I saw that day were from a reintroduction scheme based in the valley. Three years ago, walking in the Sixt Passy nature reserve, a warden showed me the one breeding nest in the region. The parents did not return while we waited.

And so, it was almost another twenty years before my next encounter.

This October I made a short visit to France, climbing the Point de Chalune in the crisp autumn sunshine. The peak is a two-hour walk from the top of my favourite cycling col: the l'Encrenaz above Les Gets. We were lucky with the weather: Mont Blanc in full view to the south; Lac le Man to the north. At the summit, two men with binoculars were recording birds for a survey—not that much of interest had appeared, one said.

Until that is, he finished his sentence. For no sooner had the recorder sat down than my friend Justin asked, what are those birds approaching us?  There were seven of them in all: five griffon vultures and two enormous Lammergeiers. They drifted above and below us, like a squadron on reconnaissance. The surveyors whooping with delight, furiously taking note of their maturity and size.

In jest, our new friends credited us with the show, suggesting that vultures liked to smell out the English.  Nous ne sommes pas anglais - nous sommes gallois, we replied, and they laughed. The Welsh, they said, must not be so tasty!  With that, the birds departed, swooping over the valley in the direction of the Désert de Platé.

And before we'd gathered breath, they were gone. 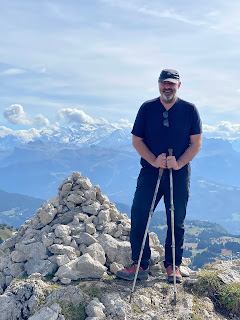 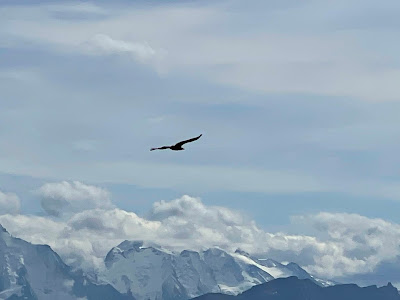 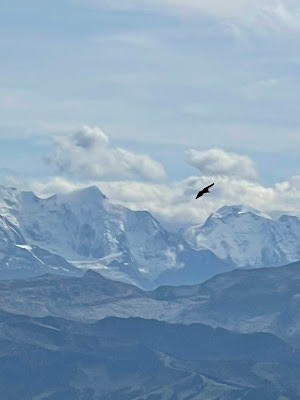 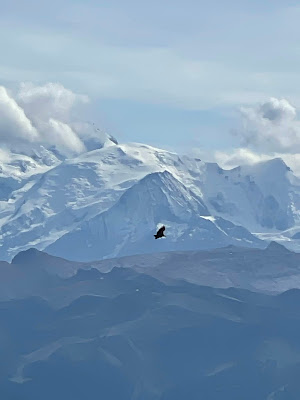 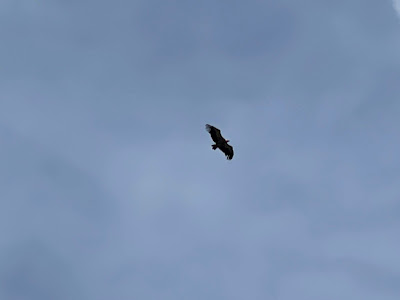