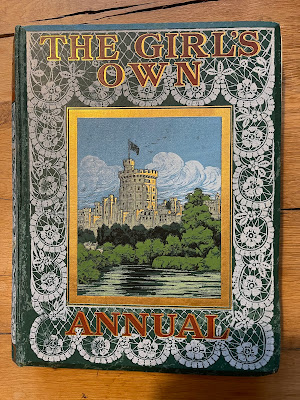 I don't generally like second-hand bookshops. They smell fusty and are usually full of poorly curated stock, infused with a sentiment that yellowed pages have a value greater than their words. For a writer, second-hand books mean no commission too—not that I've ever earned more than a pittance through sales.

But a few months ago I made an exception. There was a pop-up charity stall at the National Trust and for some reason, we wandered inside. Ignoring the displays of hardback novels and Seventies cookbooks I headed to a section of old magazine journals and one, in particular, caught my eye: The Girl's Own Annual from 1901. It's a collection of that year's weekly issues and a fascinating insight into how our lives and expectations have changed — for better and worse.

A little research tells me that the Girl's Own Paper was first published in 1880 by the Religious Tract Society, later becoming Lutterworth Press. Astonishingly, it ran through to the Nineteen Fifties. The weekly journal was a mix of stories and articles focused on the interests and aspirations of girls; its editorial mission was one of self-improvement, urging its subscribers to make the most of their talents, albeit always with an element of decorum.  A modern-day reader might reasonably conclude that its pages are proof positive of the subservience and frustrations that women were expected to bear. 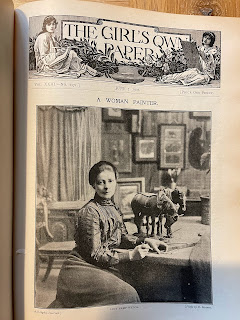 And in the obvious sense, they'd be absolutely right.

But in another—the one that struck me most—they would be missing something of its virtue. For there is much in this little long-forgotten magazine that we would do well to remember and for which, in its loss to our outlook more generally, I'd suggested we are more diminished than developed.

Take for example, the quality of the writing. Sure, it's aimed at educated middle-class girls, but nonetheless, it's of a standard we simply wouldn't see in magazines today. The weekly stories are full of long passages of complex dialogue, and yet if you stay with them, they are skillfully constructed and a lesson in serialised fiction. Some of the titles made me smile, including the travails of Pixie O'Shaughnessy and the growing pains of little Barty's Star. Others are retellings of classical myths, including The Fair Captives of Castle Vulcan - a tale of love and loyalty. Imagine that in a teenage magazine today!

But it wasn't so much the stories that I liked dipping into as the informative articles and the 'answers to correspondents' pages, both of which shine a light on the opportunities for educated girls at that time. One reader enquires about working in a post office, another about the route to becoming a teacher.  Detailed and encouraging responses are provided—though interestingly, always concluding with a note that on becoming married the applicant would, of course, be expected to resign! 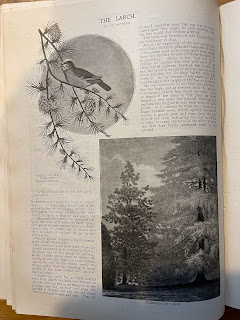 Turning the pages this morning I found a lovely article on life in a laundry, another on soldiers returning from conflicts abroad that's an early lesson in recognising post-traumatic stress. There's a piece on Eastertide in Russia sitting side by side with this week's Household Hints; pictures of Our Queen Alexandra front a cover, but more commonly it's taken by profiles of women making contributions to science and art. For musicians, there's the Fidelio club which discusses concertos and classical pieces in astonishing depth. And there are regular columns on nature, needlework, points of law, careers, poetry, cooking, geology and puzzles so complex they make the Times Cryptic seem a doddle.  Sport is tellingly absent. 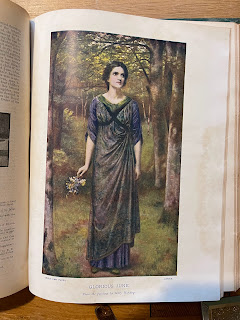 To read The Girl's Own Paper today is like looking through a window to our past. Of course, it was a bright and shiny and rose-tinted one, and I sense that large sections of the poorly educated working classes would have found little of interest—or comprehension—in its content. I know too that it's all too easy to fall into a high-brow lament about a loss of educative endeavour and lessening of standards...  The truth is, there's much more information available today (albeit in different formats) and we shouldn't think that all writing has been reduced to the level of tabloids and Twitter. 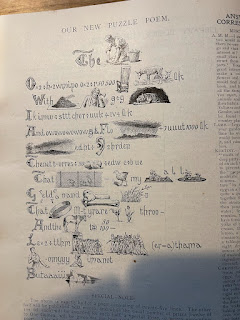 And yet still I am struck by its mission and zeal.

Opportunities for women have been rightly transformed in the decades since my time-bound volume was published. But at the dawn of the Twentieth Century, aspects of its stance and choice of content were radical and are worthy of praise today. I wonder, how many readers of the Girl's Own Paper became suffragettes; how many went on to make contributions to art, science, commerce —or fostered those of the next generation, for whom they carried ambitions that had been kindled by their weekly reading of this magazine for betterment.

An annual subscription in 1901 would have cost four shillings and four pence - about forty pounds in today's money or 80 pence per issue. That seems extraordinary good value to me. So too the five pounds I spent on this quaint volume at the National Trust bookshop 120 years later.  If the magazine was still in print —there was evidently a boy's version too — I reckon I'd subscribe on the spot.