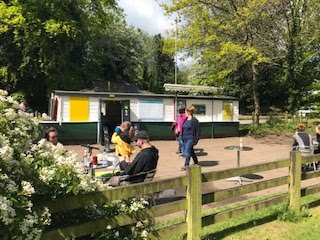 It's strange the places that we like the most; that bring a smile to the face whenever they're mentioned; that we love for their familiarity more than any prospect of the new...

Since returning to South Wales four years ago, I reckon the spot which has given me most joy, is a tiny little cafe, housed in a land-locked barge on the edge of the canal at Pontypool. It's at the Pontymoile Marina near the southern end of town and one of those locations that estate agents might chance as 'semi-rural'. When we were there last week, I told Jane it was my favourite place to eat, and wouldn't swap it for any of the gastro-pubs that are ten-a-penny in Gwent.

She's heard all this before. I give her the same spiel every time we come, which is about once a week and more often if I get a chance. Thankfully, Jane likes it there too, and has long since given up suggesting I change the record or widen my horizons. As I wiped the last crumbs of eggy bread from my plate I muttered something about it being the best cafe in South Wales and possibly my favourite of all time...

Which is unashamedly true.

It's ironic, that living in area renowned for pubs and restaurants, I increasingly dislike visiting all but a few. Most times there's an inverse relationship between how much a place is lauded and how much I enjoy the experience. It doesn't help that I don't drink, but it's more than that: they cost too much, they're inauthentic and they leave me cold. 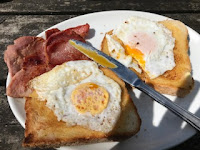 Unlike at Pontymoile.  Where, usually, we take a walk on the tow path to work up an appetite, reminding ourselves that in less than a mile we're in the national park, and wondering why more people don't take advantage. In truth, it's busier at weekends but on an average Tuesday we seldom  pass more than a handful of ramblers on the way to our turn at bridge number fifty nine... Then it's back at a spritely pace for two eggs on toast, two slices of bacon and a cup of tea please - twice.

That all comes to around a tenner, and it's served with welcoming smiles and a chat about where we've been and who's doing what. Jane reckons I'm a different person at the cafe - that few people get to know as much about me as do Kelly and her dad James who run this little gem of a place.  But then they're as much a part of why I visit as the menu.

On the subject of which, don't expect any fancy-pants bistro fare. All day breakfasts are the staple, with hot drinks, hand made cakes and often a daily special, which might be home made soup, or perhaps bubble and squeak... you get the idea. And so do lots of others - on a sunny Saturday the customers spill onto outdoor tables and we've learned to order in advance as a sell-out isn't unknown. 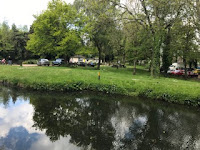 But as I said, it's not really about the food - or at least, nothing you'll find on the menu - because what they really serve here, is something that's hard to write down and even harder to price.  I'd call it 'care' - and the whole place reeks of it! From the hearty food to the bright decor, to the thoughtful attention to their local community (we like to have cheap treats for the kids, says Kel) - it's as tangible and in your face as the smell of their sausages on a winter's morning.

And without a doubt, that's why I like this place so much.

In a world of that's full of bland shops, bland restaurants and even blander service - this place is real and alive and full of character. Sure, there's a hint of nostalgia in my liking it so much - of times and facilities we've lost - but why not, and why not celebrate and support what's still there.  Kelly and James are making a go of a small business that's a little different - and a lot better - than any amount of branding could ever deliver.

So it's sad to hear that the marina is due to be redeveloped, with plans for a visitor centre putting  their tearoom under threat.  And how ironic that by making the place so popular they've put their own future in doubt - not that you'd sense it - only last week they held a free afternoon tea for their customers.  If the revamp goes ahead I hope the trust licences any new facility to Kelly and James - they've earned that chance.  But more than that, if they don't, they'll lose something special very special indeed.

Visit while you still can:  The Boat Yard Tea Room at Pontymoile Marina

Labels: About me, Special places, Wales