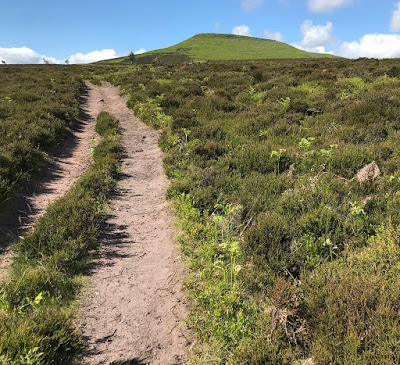 Whenever taking photographs I'm reminded of a tip I read years ago: the best pictures show a new perspective - bend low to the ground, stand high to the subject; shoot portraits from the side. The thrust of the advice is that you shouldn't keep snapping in the same repetitive pattern.

I was pondering this yesterday as I walked up Sugar Loaf mountain on the outskirts of Abergavenny. It's the nearest peak to my home and at a tad under 2000ft a high contender for the summit I've stood on most often. In truth, that frequency is more a consequence of proximity than any great love of the view. The tourist path from above the A40 might get the heart pounding, but it seldom stirs the spirit.

So what a delight that on a whim I should decide to drive north and tackle the hill from a different side. My route would start lower than usual, cross the mountain's moorland saddle, and return with views of the Grwyne rather than the roadworks on the Heads of the Valleys road. It's a fiddle to get to, takes a deal more time, and the supposedly well signed car park took me two attempts to find. 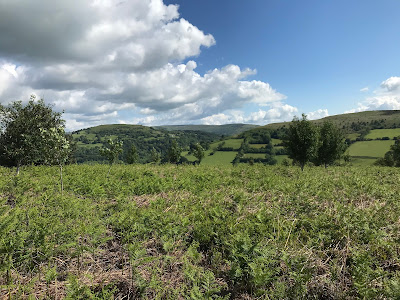 Yet almost immediately I had the sense of a good day ahead. The birdsong might have accounted for my felicity, or perhaps it was the brightening sky; or the bank of foxgloves, my favourite spring flower. But in the event, what made me smile most was an abandoned microwave and fridge, comically plugged to the earth as if making a point about its energy.

That slantwise perspective set the tone for my walk. Almost every step seemed lighter, more vivid than the norm. The path was greener, wooded, less wide; I saw a stoat, a kite circling above. The Black Mountains, their silhouettes a lesson in tonal regression, were with me all the way. In thirty years of climbing this hill, I'd never been so aware of the view or less concerned with my speed. 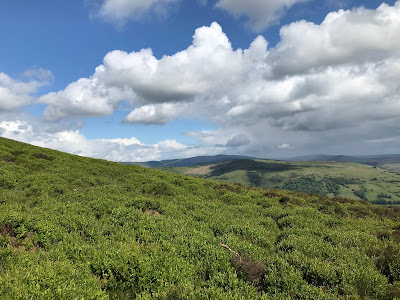 Perhaps I shouldn't have been surprised. A friend mentioned to me recently that she'd hiked from Solva to Newgale on the Pembrokeshire coast, adding, it's so much better than the other way round.  She's right - in that case it's something to do with the arc of the sea on your shoulder, the lie of the cliffs, and the gradual approach to a distant shore.  To walk the other way is fine, but less climatic -  especially in a midday sun.

Which reminds me of a related piece of advice - that when photographing landscape, it's best to wait for the lengthening shadows. The trouble is, we're seldom out that long, or free to start so late. I can think of any number of routes that are substantially different not only as a consequence of approach and direction, but also the time of day.  And yet, for one reason or another, we chose to go with the familiar.
The summit of Sugar Loaf is most often viewed as a conical peak - indeed, there's a common misconception that it's an extinct volcano. The route from the north shows it to be broader, the path spiralling round in a pleasing helter-skelter approach.  Wheatears flash their arses from the rocks, larks sing above the moors, and all the time there is peace to this side of the hill that is lacking on the bracken lined thoroughfares to the south.

Returning from the top, I diverted to walk on the north-east spur.  The carcass of a deer was rotting by a low stone wall, its exposed spine simultaneously grotesque and intricately beautiful. Despite the stench, I leant close to photograph it from above, pondering if I'd ever seen a dead deer before. Before heading on I checked the map for the name of the little peak to my left. It's called Bryn Arw and I'd bet a lot of money that it's visited by fewer than one in a hundred who climb its famous neighbour, Skirrid Hill. 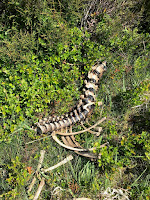 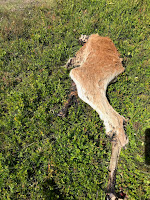 As I reach the end of the ridge I think about the coming weekend. The horizon takes a line from Offa's Dyke to the bulk of Blorenge and the South Wales valleys; in between lie the gentler fields of the English lowlands - it feels like I'm standing on the edge of what's wild. Perhaps I'll climb that little peak tomorrow instead of another trip to Skirrid? My friend reckons that's one of the best walks in Monmouthshire, and to be fair, she's a good judge of these things. But today I'm not so sure - for I'm reminded that sometimes it's good to chose a different path. 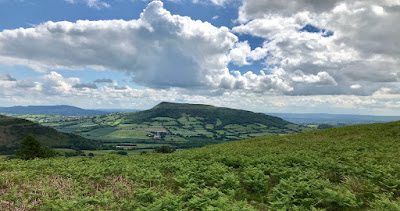