Shopping my library - Words of the Grey Wind 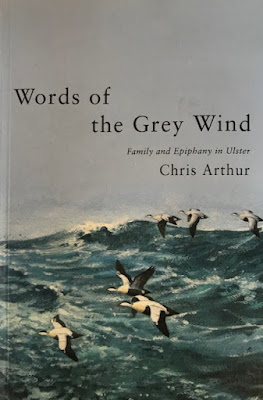 Earlier this year, Jane announced that she wouldn't be buying any new spring clothes. Instead, she would 'shop her wardrobe': a strategy, she explained, of restyling, recycling, and in some cases simply wearing the back catalogue of purchases that second thoughts or changing circumstance had left little used the previous years.

It would have been easy to direct a barb at what I've long felt to be the toxic combination of Instagram influencers and easy access - free returns - life will be better - clothing websites. But I wasn't about to risk a reversal, and in any case, if I'm honest, my study has it's equivalent in 'click to buy' purchases.

Though neater than a pile of clothes, and superficially more worthy than the lure of fast-fashion, the stack of unread books by my desk is just as wasteful of our resources as any unworn dress or last year's must have but now oh so passé sandals. For until we read them, printed words are mute - no more than totems of our good intentions (and reminders of their failure to be realised), clothed in fading if feel-good dust jackets.

Sure, there are those who'd claim bookshelves are storehouses of knowledge; research tools, food for the imagination and the soul; Umberto Eco had a library of 30,000 volumes, they'd say - there's proof, if ever you need it...  But really? Quite how is that soul-feeding ever going to happen exactly - other than when we open them?  The vast majority of unread books in my study were not bought for reference - they're simply forgotten notions that deserve revisiting, resorting, and most importantly reading, before they become buried under yet more of the same.

So taking inspiration from Jane, I've decided not to buy any books for at least six months, and instead to 'shop my library'.  For the first time my holiday reading has cost me zilch - at least in the present moment - and it comes with the bonus of a ticking the list / unfinished business  type satisfaction.

Which brings me to Words of the Grey Wind, Chris Arthur's sublime reflections on the interconnections of life, memory, place and time.  I can't recall when I bought this book, but have a vague memory of it being recommneded by a reader of this blog - someone who'd read Counting Steps and made a complimentary connection. Has it sat on my shelves that long?  What a waste if so.

Arthur's essays are not typical holiday fare - they take time and attention - every somnolant nod requires two or three paragraph of rewind. Yet there's something appropriate in reading them at a juncture which allows space for the density of his thoughts. These are marvelously crafted, deeply considered, essays; the perfect illustration of the care I was advocating in my post on words and pictures. They are like the mountains that surround me here - climbing them is never a stroll, but always worth the effort.

The collection opens with Kingfishers, weaving almost all the book's themes into its first 18 pages.  A masterpiece of linked juxtapositions, the narrative shifts from nature, to memory, tragedy -  insanity even - and slowly back to the bird, its and our transcience in the scheme of things. That decription is inadequate to the richness of the writing, for like in so many of these essays, Kingfishers spins question on question, picking away at, if not entirely unravelling, the Gordian knot of what it is to be human.

Many of Arthur's essays take an object or event - the ferrule on his father's cane, a conversation in a bookshop, the fossilised bone of a whale -  from which he crafts reflections on the miriad of  connections which lead to where we are and what we will become. There are frequent references to Ulster and his family roots, but my sense is that these are staging for his main concerns - this is not so much a book about place, as 'our place in the world'.

Words of the Grey Wind achieves that rare feat of being both deeply personal and yet universal in message.  It's evident that Arthur has studied philospohy and theology, and there's a recurring influence of Buddhist teachings in many of the pieces. But mostly, there's an existential underscore to his voice  - a sense of being alone in the enormity of it all - that resonates with me and is perhaps why I liked this collection so much.

I yearn to write as well as Arthur. Few books have stopped me so abrubtly in my tracks - to think that I took so long to open it. And now I want to read it again.