Reflection and adventure - at the Refuge de Chavanes 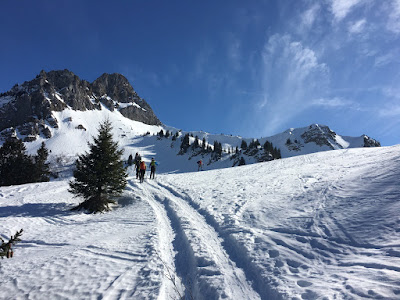 Twenty years ago (a little more actually), on plane from Nepal, I had a fleeting encounter that has lodged with me ever since. After kayaking the Kali Gandaki River I was flying home with amoebic dysentery as a souvenir – next to me sat a Nepalese businessman, who in making conversation was curious as to why I should visit a country that could make me so ill?

I remember explaining that Nepal was special, the mountains higher and the rivers more remote than could ever be found in Wales. ‘Then go to the Alps’ he replied, ‘you can have just as grand adventures there!'

I recalled this conversation last week, high in the mountains of the Haute Chablais, as the ridges of the Pointe de Chalune blushed crimson in the embers of the light. That afternoon, a group of us had skied and snow-shoed from the Vallee du Brevon to the remote Chavanes refuge. It sits in the shadow of a glacial cirque, to the south of Les Gets, about an hour from Geneva.

I’d not worn snowshoes before. In a sense, that was an adventure in itself: adjust the heel, strap in toes, check for grip as the baskets flex... At first, I’m glad of my poles, but soon I’m into my stride, scanning for crossbills as we pass beneath pines that are laden with cones. There are tiny spiders scurrying between the fallen needles, and I try to avoid them by shoeing in the rutted snow.

An hour later, we reach an isolated chalet. There is running water and an improbable earth closet for passers by, though the prospect of undressing persuades me it’s easier to pee around the back. We gobble cheese and salami as Simon, who’s been here before (and is ex-navy so can’t help but command), gives us a briefing: it’s steeper from here, there’s ice on the track; be careful towards the top. 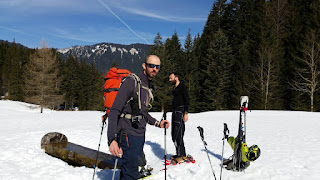 Some in the party are using skis, attaching ‘skins’ that resist backward slippage when the ground gets steeper. It looks an odd way to travel, and all the more so in the knowledge of the lifts and gondolas on the other side of the valley. Eddie tells me it’s like fell walking, only with on planks on your feet - he explains that it might look hard work, but there’s a deep satisfaction in making the summit under effort.   As he talked, I remembered the last time I climbed Snowdon; the contrast between the walkers on the summit, and the crowds, making a beeline to the café from the Llanberis train.

My snowshoes grip well on the steeper ground, they have integral crampons that bite into the ice, and a ‘heel raiser’ which takes pressure of the calves. Though I start in the lead, the others gradually pass me. A year with a dodgy knee has added considerably to my ‘pack’, but overall, I reckon I’m not going too badly for an old man. Leanne, who looks as though she could skin up in half the time, kindly stays to keep me company. She too has travelled widely, but talks eloquently of her love for the Alps, and desire to keep on returning.

Eventually, the trees give way to more open ground, and the final pull is less steep than I’d feared – the others have waited at the rise. We’re in a ring of granite and ice, cradling a bowl of trackless snow; above us are the peaks of the Chavannais, the Chavasse, Chalune and Haute Pointe…  Nobody is saying very much.

At the refuge we meet a walking party from Thonon les Bains; they are leaving after what seems to have been a fine lunch. The refuge is owned and manned by Claudius, who, in his visitor books, is variously described as a ‘sage’ and ‘mountain gourmand’.

So perhaps unsurprisingly, we are welcomed with mouse de cider and wine laced with hazelnut syrup. At night he serves us prunes in bacon, followed by chicory salad, pain de campagne, beef bourguignon, a cheese board the size of which I’ve not seen before… and some apricot cake to finish.

And then, there were the wines.

They began with a liqueur de prune, followed by a homemade apricot, some sapin and cassis, and, of course, a little genepi to finish… At one point I counted nine bottles on the table, but it was getting hard to focus.

I’ve been visiting mountain refuges for more than thirty years and the Chavanes is certainly on the rustic side, but its food and ambience are among the best I’ve discovered. The company was a delight too, reminding me that for all I occasionally dream otherwise, I prefer the warmth of friends to the solitude of journeys made alone.

Which, in a roundabout sort of way, brings me back to the man on the plane from Nepal. I long ago came to the conclusion that he was right. I’ve been exploring wild places for all of my adult life, and am fortunate to have easy access to the Alps – but the truth is, we don’t need to go very far, or always to be alone, to find adventure.

The Valley de Brevon is a stone’s throw from the Portes de Soleil, and yet, a million miles from the après ski of Morzine. I could show you places that are much the same in Wales, The Lakes, or Northumberland. Only last month the definitive Scottish Bothy Bible was published – there’s enough inspiration in its pages for a lifetime. 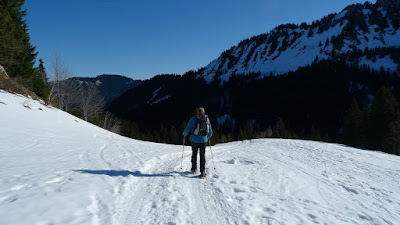 The next morning (after breakfast by Claudius) we descended to the bustle of the valley, and I reflected on the simple, life-affirming, trip we had made together. The Chavanes refuge is, to use an expression coined by the Himalayan explorer Mo Antoine, as wild and as wonderful, as I need to ‘feed my rat’. He meant, by that, to ‘scratch the itch’, to sate his quest for adventure.

I understand what he meant, and feel privileged to have done something of the same. 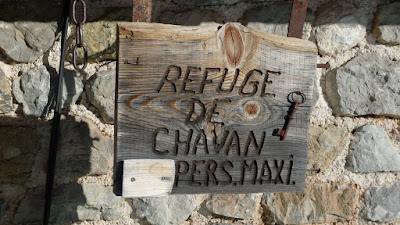