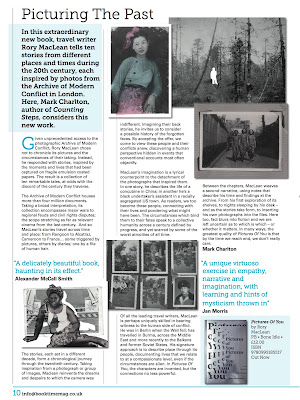 It's always a thrill to see one's writing in print, even if only a book review.  Here's a piece I wrote for Booktime Magazine, appraising Rory Maclean's new book.

Pictures of You: Ten Journeys in time
by Rory Maclean

Given unprecedented access to the photographic Archive of Modern Conflict, Rory Maclean chose not to chronicle its pictures and the circumstances of their taking. Instead, he responded with stories, inspired by the moments and lives that had been captured on fragile emulsion coated papers. The result is a collection of ten remarkable tales, at odds with the discord of the century they traverse.

The Archive of Modern Conflict houses more than four million documents. Taking a broad interpretation, its collection encompasses major wars to regional feuds and civil rights disputes; the scope stretching as far as relevant cinema from the last century.  And so Maclean’s stories travel across time and place: from Rangoon to Alcatraz, Cameroon to France… some triggered by pictures, others by diaries; one by a file of human hair.

The stories, each set in a different decade, form a chronological journey through the twentieth century. Taking inspiration from a photograph or group of images, Maclean reinvents the dreams and despairs to which the camera was indifferent. Imagining their back stories, he invites us to consider a possible history of the forgotten faces. By accepting the offer, we come to view these people and their conflicts anew, discovering a human perspective hidden in events that conventional accounts most often objectify.

Maclean’s imagination is a lyrical counterpoint to the detachment of the photographs that inspired them. In one story, he describes the life of a concubine in China; in another he’s a black undertaker’s assistant in a racially segregated US town. As readers, we too become these people, connecting with their lives and pondering what might have been. The circumstances which bind them to their fates, speak to a collective humanity across a century defined by progress, and yet scarred by some of the worst atrocities of all time.

Of all the leading travel writers, Maclean is perhaps uniquely skilled in bearing witness to the human side of conflict. He was in Berlin when the Wall fell; has travelled in Burma, across the Middle East and more recently to the Balkans and former Soviet States.  His signature approach is to describe place through its people, documenting lives that we relate to at a compassionate level, even if the circumstances are alien. In Pictures of You, the characters are invented, but the connections no less powerful.

‘A unique virtuoso exercise in empathy, narrative and imagination, with learning and hints of mysticism thrown in’  - Jan Morris

Between the chapters, Maclean weaves a second narrative, using notes that describe his time and findings at the archive. From his first exploration of its shelves, to nights sleeping by his desk - and as the stories take form, to inserting his own photographs into the files.  Here too, fact blurs into fiction and we are left uncertain as to which is which - or whether it matters.  In many ways, the greatest quality of Pictures of You is that by the time we reach the end, we don’t really care.

Rory Maclean is the author of more than a dozen books, including the UK top tens Stalin’s Nose and Under the Dragon. His recent Berlin: Imagine a City was chosen as book of the year by the Washington Post whose reviewer described it as ‘the most extraordinary work of history I’ve ever read’.