Nigella and the Gogglebox 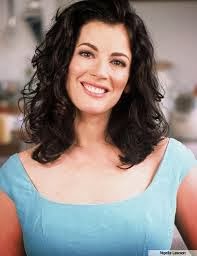 I returned to work yesterday having recovered (almost) from this dreadful man-flu. It was good to see my colleagues again and enjoy a little office banter.

Topic of the day was Nigella Lawson and whether she's 'a lovely lady with a dreadful ex-husband who's using a court case to destroy her reputation'  or  'a coke-head and a bad role model at odds with her public image.'  I've simplified the two positions of course, but I'd say opinion was fairly evenly divided.

Frankly, I'm not taking sides but I did ponder on two thoughts on my way home.

The first was to note the relatively restrained tone of the assessments towards Nigella - in the press as well as by many of my colleagues - compared to that meted out to other cocaine users: the disgraced former chief of the Coop bank would be a good example. If the allegations are true I'm not sure there's much difference in what either was up to?

The second was a remark I overheard, claiming that to describe Nigella's drug habit as criminal wasn't correct. Excuse me - buying huge amounts of cocaine, and allegedly for her daughter too? Yes but she wasn't dealing! I can understand why someone might regard dealing as more serious, but possession of a Class A drug carries a seven-year sentence - that's a criminal offence in my book. Whether it ought to be is a different issue - in the meantime see yesterday's post on truth and logic.

But much more fun than Nigella was the chat about Gogglebox. 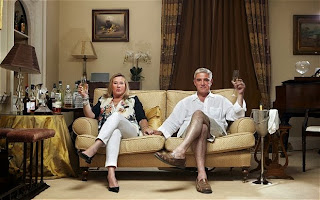 Universally loved by everyone in the office - it's the most weirdly compulsive programme I've seen in years. The format, if you don't already know, is a fly on the wall of various couples and families watching television. This week the cameras captured their reactions to Doctor Who, the Ashes defeat, a Star Wars Movie...

The characters are all larger than life and I guess everybody has their favourite - I especially like Leon and June the retired teachers from Liverpool; Jane likes the posh hoteliers who are always sloshed. Evidently Gogglebox has proved so popular they've already sold the rights to America, and China is considering a series. 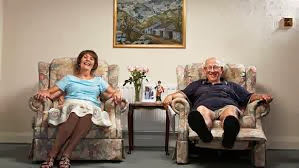 But what I find most fascinating about Gogglebox, is the uncomfortable realisation that we've come to the point where TV is so dull, we'd rather watch other people viewing it than sit through the programmes ourselves!

I wonder if that principle could ever apply to blogs - don't bother reading the Bike Shed, just click the webcam to watch me typing... and sneezing (though not from cocaine I assure you).

Somehow I don't think it would catch on.
Posted by The bike shed at 12:13 PM

Labels: About me, Ideas, NABLOPOMO