Lists for blogging... and for life 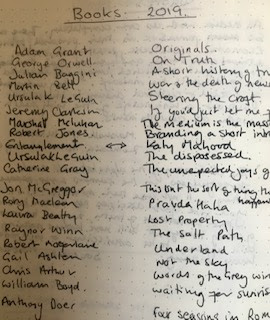 Most bloggers I know keep lists, at least in their head if not on their PC or jotter. I use all three, as well as my phone and the blackboard in our kitchen and the back of a packet or two. When stressed, list-making is my go-to relief, as if ticking all the items will eliminate the source of the angst. Get everything done, I say to myself, and there’ll be time to relax… and start a new list tomorrow.

For Views From The Bike Shed, I make a note of the posts I might write, a store of ideas for when inspiration or memory fails me. It’s part of the curation process I say, the planning for a varied output that will keep my readers engaged. There are currently eleven items in my notebook, dozens more on my phone and many more that have been consigned to the bin.

On the page beside me as I type is a list that includes: The Three Peaks of Abergavenny; Collecting Jugs; Digital Minimalism; Girls Own Paper and Bookmarks.  How many of these, I wonder, will make it into print? Two would be good going; three a marvel. And those I’ve mentioned are the most likely; there’s another six I might as well cross off now.

Perhaps the problem is not so much with the making of my lists as with the nature of our epiphanies. What seems so vital and vibrant in the moment, tends to fade as the passage of time dulls our enthusiasm. How often have I woken from slumber, written down some putatively genius insight only to read it a week later and think, ‘In your dreams Mark; literally, in your dreams…’.

But is this such a bad thing? Because for all that some ideas are lost—and this blog is sparser as a result—isn’t the unconscious mind also acting as a sort of quality control?  And frankly, if it were not for a little temporal distance between my thoughts and my keyboard, the blog you’re reading might all too easily be called Rants rather than Views From The Bike Shed.

And that wouldn’t do.

Because sounding off seldom works out well and almost never if done too often. Indeed, rants by their nature have an impact only if they break the pattern of the norm; to be permanently raging is invariably to become blinkered and somewhat deaf to others. The exceptions that prove this rule are those rare talents such as Jeremy Clarkson, whose columns, far from being true rants, are actually humorous vexations on the absurdities we encounter.

Which makes me wonder if my list-making—and my failure to follow through—is any different to everyday life? We all have our passing fancies; intentions that sound great in the pub or as presented on TV. But when it comes to taking action, they suddenly don’t seem so compelling. For years I’ve been saying to Jane that we really must go to Hampton Court, after all, it’s not that far… so long as we set off early, and avoid the London traffic and book in advance…

In her turn, Jane says I should be less driven; try to enjoy what’s around me instead of always looking ahead. It’s fine to be doing she says, so long as you don’t forget about being. Actually, those words are mine not hers—she’d put it more plainly and tell me to stop obsessing over things that can wait. And why, she’d ask, am I so focused on striving that I lose sight of what we already have?

She’s right of course, and yet I can’t shake the habit. There’s a body of research that claims achievement is fundamental to our happiness and sense of self-worth. I feel it keenly, together with a sense of responsibility to others as well as myself. I’m sure this explains my reluctance to retire and certainly my intention never to stop writing.

I’m conscious too, of not wasting the opportunity and privilege we’ve been afforded. Imagine a life in which your ambitions were thwarted, your chances proscribed by custom or lack of resources. Such was the lot of most people (women especially) for millennia—and in truth, it remains the case in large parts of the world. My parents in law, two former school teachers, have visited over one hundred countries in their retirement—an achievement that’s unthinkable in historical terms.

Theirs of course is a different kind of list to what we began with. Like those I keep of books I’ve read, it looks backwards not forward, recording rather than prompting. There’s a danger, with lists of this type, that their length becomes more important than their purpose— but at their best, they can be a trove of memory, imbuing a sense of a life well-lived. The concept of a ‘bucket list’ has become commonplace parlance, and a reflection of a predominantly secular outlook on the ticking of our clocks: carpe diem; you only live once; eternity is an awfully long time...

Which inclines me to think I’ve been rambling on quite enough. What started as a notion about blogging has morphed, through a series of unplanned diversions, into reflections on the good life. And maybe that’s a fitting conclusion: that as writers the purpose of our lists is not so much to schedule our output as it is to remind us of the wealth of the choices we have on offer. Which is a good and wonderful thing, so long as we know also when to stop.