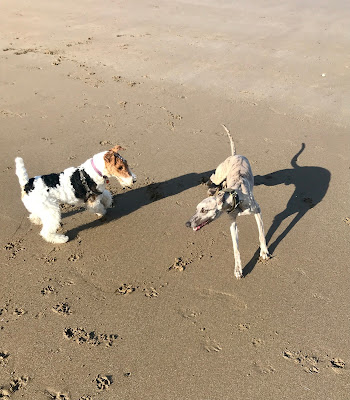 I've been thinking this week about pictures and photographs. In part, this was sparked by a blog on altered images—that's not a reference to the Eighties pop band but to photoshopped files and the artistic possibilities they offer. It was also prompted by my reading of a spellbinding essay in which the author (Chris Arthur) reflects on a childhood photograph of his mother. And finally, my motive was influenced by a request from one of my readers to post a picture of Oscar's new friend Eric!

The purpose of these acknowledgements is more than mere introduction.  I want in a few allocated sentences to paint as full a picture as I can; to let you in on the background as well as seeing what's up front; to put this piece in perspective and present the truth as best I can.

In which endeavour I'll inevitably fail.

For even if my words were perfect and we had all the time in eternity they could never be more than a curated representation of things as they really are.

Such is the way with pictures too.

We intuitively know this with a practice such as painting. Indeed it is very much its purpose, even for so-called photorealistic art (a paradoxical term if ever there was one) which by its verisimilitude, challenges us to look more closely at the world as it is. The image in art is a product of response not representation.

But with photographs—leaving Photoshop aside—we more typically think the opposite; often we use photographs as objective evidence or documents of record. And of course, in one sense, this is fine and appropriate. But in another—and in their filtering out of references and senses of a different sort—they are as flawed as my words will always be.

As you look at the snap of Oscar frolicking with Eric, do you get a sense that his owner was nervous; that she (or was it a he?) was at first concerned they might run off...  And what of the heat of the day, or the smell of the sea... the sand between my toes?

Which I have to tell you was irritating and not pleasant at all—because if I didn't you'd not know it from the image. Just as you'd not know that I was there without Jane because she was nursing her mum; that Dylan and I were sad at her absence; that Oscar was out of sorts all week too. And I'm not even scratching the surface here.

Does any of this matter?

Soon after I took the picture, I passed a family setting up their blankets and windbreaks for the day.  The kids were pushing and shoving; dad was moaning about the heat; mum looked like she was frazzled already...  Until their teenage daughter shouted 'photo everyone' and all of them posed with Facebook smiles, waiting for the silent click of a virtual shutter.

I wonder, in years to come, what recollections that picture will conjure; what stories its pixels will print on the pages of that family's memories.  And does it matter too if those are truth or myth? As my art teacher once said, 'We none of us know if the Mona Lisa is an accurate likeness.'

Which should remind us that all images are altered realities.

The process of composing them is itself an editorial act—part of the curated representation I spoke of earlier.  What's more, in our making of pictures (and especially so with the taking of photographs) we are inescapably bound to altering our experience of the subject. Whatever our side of the shutter, are we not posing for that perfect portrait?

So perhaps the operative word in this blog title shouldn't be altered, but one I've used twice in passing. For to curate is not only to select and organise, it is to care—and if in so doing to we tint our memories with a rose coloured wash, then is that such a bad thing?  Just as our senses filter out peripheries, perhaps our taking of photographs allows us to carry our past more lightly? Perhaps the altering of our images is what's needed if we are to bear the weight of the memories they would otherwise hold.