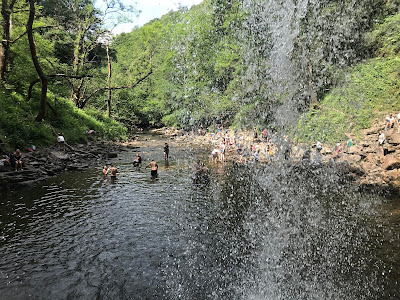 Often when I walk with Jane she says I may as well be somewhere else. Other couples she points out, use walking as a chance to chat and hold hands, whereas more often than not I'm striding ahead and miles away in my mind  If this seems selfish, then I must beg forgiveness or at least understanding.  It's as if the repetitive act of this simplest of exercises gives rise to meditations that I'm powerless to resist.

In truth, I'm glad of her presence even if inwardly elsewhere. So in an attempt to bridge the divide, I've recently taken to sharing more of what I'm thinking. I call it 'the kind of things I ponder' conversation and though more often as not it elicits an eye roll,  just occasionally it engenders a discussion that slows my pace and brings us together.

'Things underrated' I said the other day, is one of my go-to ruminations.  We all have our lists of the best and the worst—the finest restaurant, the funniest book, the town we'd least like to live in... Whatever category takes our interest it's natural enough to rank and rate it in an order of excellence. So much is commonplace and pleasant enough to debate on a hike or a wander.

But 'underrated' is something slightly different.  It's not about what or who is the best or worst, it's about the gap between our perception and reality; it's about changing our focus from a scale based on excellence to a one of latent potential or unrecognised achievement.

We all know that Pele and Maradona are among the best footballers of all time; but who are the lesser mentioned players that have a claim to be up there with the greats?  And while we're at it, considering what's overrated is a good muse too; which towns and counties, for example, have reputations (or house prices) that far surpass what they actually deliver?

I was thinking of all this in a slightly different context when walking in the hills this weekend.  My son had asked me earlier if I'd visited every national park and which I thought was the best.  I told him I had and although it was hard to pick a favourite I'd probably opt for The Lake District as the quintessential UK example.  Others might disagree with my assessment but that's not the point—which is that I picked an option that would almost certainly be pretty high on any public vote.

I've no idea if such a survey has ever taken place but if one has I'd bet a lot of money that the Norfolk Broads or South Downs were not contenders for the top medals. And just to add a bit of speculative spice, if I had to declare my choice of 'least favourite' national park, I'd opt for the New Forest. This will no doubt offend some, but then we all have our preferences. And a good thing that is too.

But returning to my theme, and what occupied my walking meditations, which national park is the most underrated?

Now that's much harder to decide.  Northumberland is the least visited, but for all I love that land, it is actually the coast (not in the park) which draws most visitors.  The North York Moors is relatively little known too, as is Dartmoor; the Trossachs are often passed over in favour of the Highlands or West Coast. And what about Exmoor, surely there's underrated potential there...

Magnificent as these parks are I fear they will always be overshadowed by other attractions—none of them has the latent possibilities I'm looking for. On the other hand, I can't in all conscience choose the Yorkshire Dales, the Peak District or the Cairngorms: these are obvious star performers, well known and well-trod by millions.

There's no right answer of course.

For what it's worth I'd make the case that the Brecon Beacons is the UK's most underrated national park. It's within an hour's drive of four large cities, has some of the best mountain walking south of Scotland and is vast and varied and lonely and lovely...

Why is it so little visited compared to others?  Frankly, I'm mystified but I sense the lack of an obvious tourist centre (like say Keswick or Hawes) plays a part—so too that its major peaks are just a touch under 3,000 ft.  Maybe the Welsh language is off-putting to some - all those consonants and not enough vowels.

The trouble of course is that what would make it more attractive to many risks destroying why it's so brilliant for the few.

On Saturday we stopped by Maen Llia, a standing stone of  4,000 years provenance; erected by the Beaker people, we can only guess at its significance. Legend says it occasionally walks to the nearby stream for a drink—waters that feed the magnificent falls at Ystradfellte, and which hollow the caves at Dan yr Ogof, the biggest underground system in the UK.  From the hills above here, you can see the Carmarthen Fans, the Brecon Beacons, the Black Mountains; hundred of miles to explore.

And you can do so alone, or together, or like me and Jane, a bit of both! Because other than the honey pots (of which the waterfalls are one) the visitor density here is among the lowest of any high mountain area within easy reach of millions of people. And because, in a landscape like this, we are drawn to looking in as much as out, and to talking to ourselves, as much as our closest of loved ones.

And I reckon that's underrated too.