Dogs know what to say 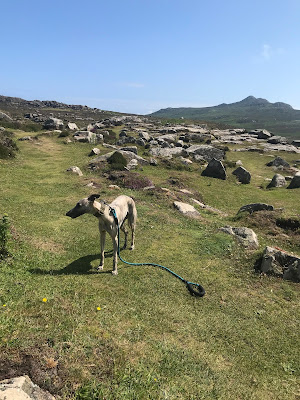 'Dogs are good when you're going through tough times - they just know what to say.' Those words came from a text my friend sent me after they learned we've had sad news. For the last fortnight, Jane has been nursing her mum, our lives temporarily upended—suspended even—as we come to terms with the limits of life.

It seems (at least in our case) that we settle quickly into roles laid down over millennia: the women caring, the men keeping going; each clutching to some semblance of normality. This week I have been in Pembrokeshire, writing and working—they merge into one, like sky and sea. Time alone feels like an indulgence, and yet there's pragmatism in it too; life goes on, jobs to be done...

Yesterday I walked with Oscar to the high cliffs at St David's Head. There were many other pilgrims, stopping for photographs at what's a highlight of the modern-day coastal path. People have been coming here for generations, seeking solace and salvation at this ending of the road. Near the car park, archaeologists are excavating a mediaeval chapel; one hundred graves are aligned east to west in the path of the sun.

It doesn't take us long to reach the cove at Porthmelgan, but already, I sense Oscar knows things are not right. Where is his pack, why are we not together on the beach?  He walks close to my knees, not from any shortening of the leash but because he's done so all week, his eyes check me every few yards. When we reach the Head he settles by my side, nose on my shoulder, snuffling in a soft steady rhythm.

Out at sea, there are gannets patrolling the flows and avenues of the tide, gliding effortlessly over what to them is its limpid surface. On the cliffs, there's a band of orange lichen that marks the limits of the salt spray, a hundred feet above the water. The rocks it washes are a mixture of granite and sediment that's half a billion years old.

In places like this, it's natural to see our lives in perspective. We talk of being grains of sand, stars in the heavens... insignificant moments in a landscape of space and time that's beyond our knowing. And yet we come here to make connections too. For we are as much a part of this place as it is of us— like the countless trillions of quarks and atoms and cells which make up our collective whole. Had we the capacity, we could trace our roots to the genesis that brought all this into being and will ultimately bring it to an end.

The philosopher John Gray says we humans are straw dogs, fated to be forgotten and deluded by our sense of difference as a species. His reasoning—and his writing—is compelling and persuasive for those of us without faith. And yet, for all its deductive potency it somehow ‘feels’ wrong, because we don't sense or act as if our lives were insignificant, whatever the lack of a greater scheme.

The problem with metaphors like 'grains of sand' and 'stars in the heavens' is that they are too static and temporally removed; they take no account of our churning of the waters; the disturbance in the sediment created by the waves and wakes of our lives. Our actions may not make much impression on the granite rocks of time, but there's value in the here and now, in the love and care and difference we make to our fractions of the universe, which are just as essential and eternal as any other.

Across the ridge to the north of the headland is Coetan Arthur, the capstone remains of a neolithic burial chamber. It seems our forefathers' found significance here too, and walking towards it I find myself wondering if it also was aligned to the sun. Jane loves this sense of history, the thought that people before us were thinking and acting just as we do. She would like to be here I'm sure, but wouldn't have it otherwise for now.

As I sat with Oscar looking back on the path we'd taken, I wondered what he saw and was thinking. His ribs were pressing on my back, and I remembered that message from my friend—that dogs know just what to say.  That's a non-sequitur of sorts because, of course, we know they can't speak. But perhaps that's the point; that being present is all that matters—that sometimes, there's nothing to be said.