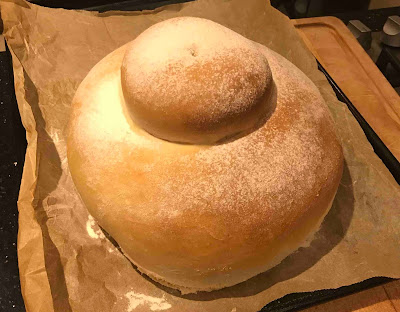 Cottage loaf - I can bake too.

If I had to make a call for 'last meal on earth', then I reckon a picnic would come top of my list—with a flask of tea and a blanket to sit on, ideally, in the lee of the Cheviot Hills. Such is my land of lost content...

But for an average Tuesday when it's more likely raining and the wind blowing hard, I'll settle for a ploughman's lunch as a close second best. Especially with a hunk of my cottage loaf to go with the cheddar, the pickled onions, obligatory chutney and of course, a sliced apple on the side.

I made one last week—comfort food of a sort—and my son said it was like my being in France (as I'd hoped to have been). He was no doubt thinking of the brie and salami we buy at the market, the huge plum tomatoes, the fresh baguettes from our village baker...  Summers in the Alps are fuelled by this fare.

But for all the similarities I reckon he's wrong, because there are few meals more English than a hearty ploughman's - pickled onions for a start, you don't get them in the Haute Savoie. Nor do you find chutney very easily, and as for apples - pah: Golden Delicious at best and that's a misnomer if ever there was one.

I jest of course, for the food in France is fabulous, and were I to drink, the wine would be too. But we shouldn't underestimate the delights of our own. I'm serious when I say I would rank a ploughman's in my favourite meals. Last week I accompanied mine with a glass of alcohol-free beer and finished off with a scoop of vanilla ice cream. Delightful.

George Orwell wrote that the best of British food lay in our bread, cheese and puddings. He rated haggis too and I'd join him in that, though not for a picnic; English apples—and Scottish raspberries—we'd both agree, are the best in the world.  I wish I'd had some home-grown tomatoes with my platter last week, that would have topped it off to perfection.

Or maybe, I could have followed it with a rhubarb fool like the one Jane made on Saturday. That's another of our specialities even if the plant comes originally from elsewhere—though try telling them as much in Yorkshire; forced rhubarb from Wakefield was once despatched daily to London to meet the demand.

As was stilton cheese which is named after the village on the A1 where the carriages stopped to pick up supplies. Pubs sometimes offer it as an alternative to cheddar in their ploughman's; others add ham, a pork pie or even a pickled egg.  No end of variation I guess, but I'll stick to the basics thanks very much.

It's not that I'm a Luddite, nor that I can't appreciate anything more sophisticated. Rather, it's that simple foods and settings are what gives me most pleasure. I'd rather have fish and chips by the quay than Dover sole in a fancy restaurant; I rate good eggs more highly than any caviar... My favourite food in all the world is homemade bread and jam.

Which come to think of it, would make a fine last meal in itself.