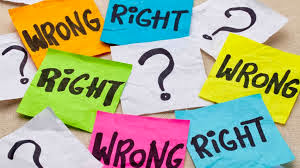 The other week I read a quote in passing which went something like: 'think wrongly if you wish; but whatever you do, think clearly.'  The exact words aren't important; it's the distinction between truth and logic which is.

I often meet people who say If it's not true, then how can it be logical?  The reason is important to all critical thinking, and especially to philosophy - it's not difficult to grasp, though to some it is clearly counter-intuitive.

One of the characteristics of studying philosophy is that it teaches us to evaluate arguments, not only in relation to evidence (which remains vital too) but also by reference to their consistency. For an argument to be logically sound it needs to expressed in a way that the constituent parts are compatible and not contradictory.  Being logical does not mean that you are 'right' in the sense of the facts and evidence  - but it does mean that you 'could be right' in 'some possible situation'.

George believes that the threat of prison makes no difference to the way people behave. At the same time, he thinks we should give tough sentences to those selling heroin because it might deter young people from becoming dealers.

George may well be right in his conclusions that tougher sentences would deter drug dealers - but his reasoning is not logical.  If the threat of prison makes no difference to the way people behave, then it follows that tougher sentences would not deter a young person from becoming a dealer. The two beliefs are incompatible because in no possible circumstance can they both be true.

Susan explained she held five dinner parties last year; at everyone she undercooked the main course and on three occasions her guests suffered food poisoning - the puddings were so inedible they've become a standing joke amongst her crowd.  Despite this Susan says she's an excellent cook - she's just been over ambitious in her choices given she's had no formal training.

Now Susan is almost certainly delusional- all the evidence suggests she's a dreadful cook and ought to get the caterers in. But although her assessment may be silly and irresponsible, it is not illogical in a formal sense. That's because her view is not strictly incompatible with her attempts at entertaining - there is some possible (albeit highly improbable) scenario in which she is correct.

The test of consistency can be applied to simpler beliefs too.

For example, if I say  'all the males in Lincoln are dowagers,' then I'm saying something that is inherently contradictory (only women can be dowagers) and therefore, necessarily untrue.

We need also to watch out for the trivial - some beliefs can be logical and true - but frankly, they don't say much.

Saying 'all eligible bachelors are men,' is self evident because to be a man is a requirement of being an 'eligible bachelor' -  dropping 'are men' from the sentence wouldn't change its meaning or truth.

These are only a few examples, but hopefully, they illustrate the distinction.  The key point is that logic requires our beliefs to be consistent with each other; for conclusions to be compatible with the premises.  It is possible to be logical in our reasoning but get the facts wrong and vice versa.

So why does all this matter?

Because in the real world, many things we debate are not 'true' or 'false' in the sense they can be proved. And even when there is persuasive evidence it may be disputed, the factors weighed differently, interpretation coloured by cultural or political bias...

Economic theory is a contemporary example of this - you'd think by now we could simply measure the 'facts' and determine what's the best route to achieve a given set of objectives? But in reality, extremely intelligent professors are regularly at loggerheads over the importance and implications of one statistic or another. Despite decades of study, there is no agreement akin to that in say, chemistry.

And when we come to examine issues such as 'morality' or 'wellbeing' or 'justice' then we've moved even further from any possibility of pinning down 'truth'. Here consistency especially matters in testing the compatibility of our beliefs across different but related issues. For example if we believe in freedom of information, then that has implications for our policy on the press, the internet, accessibility to government documents, etc.

The reality is that only a small percentage of our beliefs are evidence based - many more, and especially those related to our views on right and wrong, derive from a cocktail of intuition, emotion, cultural background, personal bias, self-interest, ignorance, and sometimes, plain old confusion.

What philosophy tries to do, is bring some order to the jumble - to rationalise the inconsistencies and create as coherent a system of beliefs as is possible. It regularly fails of course - and philosophers are as apt to think wrongly as the next man.  But to be fair - most of them will at least try to think clearly.
Posted by The bike shed at 9:36 PM