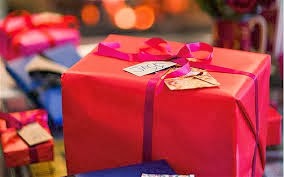 Last night Dylan was writing his Christmas list. It included various electronic games, a boxing head-guard and big brother crusher!  In truth, he doesn't really know what he wants, because, like a lot of nine year old boys in happy and relatively prosperous families, he has everything that matters.

Later, I was pondering what presents I might fancy opening and came up with an equally vacuous list. For a moment I felt quite smug that I'm not burning with material desires. But before getting too self congratulatory, I remembered it's easy to be less-materialistic when you're comfortable.

It also misses the point about presents, which are about more than satisfying needs and desires - but that's not really my subject for today

Some years ago I met Satish Kumar and recall him saying that material goods don't make us happier.  He claimed that our cravings for the latest fashion, for washing machines and gadgets and bigger cars and patio furniture, don't lead to fulfilment - in themselves, these 'things' seldom change our lives and often the constant desire (and the envy of others) can be self destructive. I buy all that (what a delicious pun).

But I don't buy the idea that the worth of material progress and possessions is a chimaera. Indeed, I also remember Satish balancing his spectacles and me thinking, somewhat unkindly, try going without those!

My experience is that there are many possessions (often long wished for) which turn out to make little difference to my life - and there are others, which (often unexpectedly) have enhanced it immeasurably.  The interesting thing is that there seems to be no pattern or relationship to the cost.

Certainly, the new possession which has given me the greatest pleasure this year has been my saxophone - coincidentally, a Christmas present last year, and something I'd long desired. It wasn't exactly cheap, however, it cost less than some folk would spend on a trip to London. If I had to choose a second item it would be the coffee machine I use every day - price £180. Again, not trivial, though hardly exorbitant for the number two slot.

As a bit of potted bike shed philosophy I'd say there are three types of materialism I see.

The first is a legitimate desire for goods which genuinely improve our lives - of course, we misjudge this at times, but wanting warm and secure housing, refrigerators and computers and spectacles... are to mind reasonable aspirations in a modern world. That the distribution of these goods is unequal and unjust is an important but different matter.

The second is the desire for goods which deep down we know to be trivial. I have a homespun theory that the more heavily something is marketed the less intrinsic worth it has: cars and beauty products spring to mind; kitchen gadgets (to which I'm especially prone) would also fit. This is where Satish is right and where it's hardest to resist.

The third and most toxic form of materialism is when we measure our self worth through the goods we own. An image of the balding business executive, drooling over his bigger and faster car, is a stereotypically sad example. But it applies equally to the other end of the social scale. And it's not just a middle age crisis - for teenagers, the minutiae of possessions can acquire an importance which mystifies those of us who've forgotten what it's like to be sixteen.

In finishing, let me dismiss any idea I'm uninterested in possessions. The other week Dylan asked me what was the best thing I'd ever bought? Our house in Wales, I replied. That alone tells you something. I'd like to think that it costing less than a mid-range car today is relevant context - but in truth, it is a materialistic privilege which has given me more pleasure than any other.

Perhaps the important thing is I'd sell it tomorrow if it threatened his happiness or that of any of my boys. Quite whether a 'big brother crusher' will do the same I'm still debating.
Posted by The bike shed at 10:54 AM