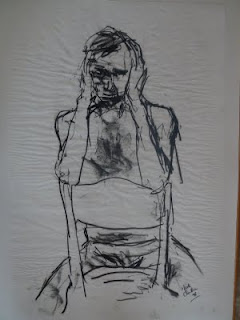 Left handed life drawing - M Charlton
I've been away from the bike shed for a few weeks so I have some catching up to do and promises to keep. It's strange how I feel the need to do this before I return to my usual introspective ramblings. It must be connected with the way I write; I like to clear the debris, to restore order with an empty desk and a 'to do' list which is ticked from top to bottom; only then can I sit peacefully at the computer.
It was the same when I painted. I would spend hours tidying my studio only to return it to chaos in a flurry of mark making - and then I'd scrub it clean again so I could start once more. This process is the exact opposite of one of my heroes, Francis Bacon, who could only work in a basement studio crammed with the detritus of his life - it has since been recreated in a Dublin gallery.
October is my busiest time of the year; an inbox full of memos, budgets to approve, the dreaded 'year end' and the writing of the company report - or more precisely, The Annual Report and Financial Statements. I spend hours finessing words and phrases - was it a good result, or merely solid? Perhaps we should say robust, or pleasing, or sound? In the end, results were in line with expectations... Quite whose is beside the point.
Business has a language all of its own. Apparently innocuous phrases carry hidden meanings; a word like progress, when used in certain contexts, can have a subtle nuance as impenetrable to outsiders as the Geordie slang I grew up with - and sometimes as dangerous to get wrong. It is the only time of year that my colleagues are much interested in the particularity of words. But ultimately it is tiring.
I think that is another reason why I stopped writing these last few weeks. My head was all of a spin, no time to clear the decks; it was overflowing with clichés - which, as you know, should be avoided like the plague. My problem was, I hadn't the energy . But no matter, it is clear now and time to move on.
I'm indebted to Sara who works with me on these things and to Colin who doesn't blog so can't have a link but whose black humour keeps us all sane - and to Deborah and Kerrie, my assistants and sometime blog followers. Thank you all.
On the subject of friends, thanks also to those who wrote or left comment asking where I was. And welcome to my new followers, I hope you find something of interest. I note that Jimmy Bastard has added his name to the list - I'm honoured. His blog, its title ostensibly a cliché, is loaded with meaning, though not at all like the city-speak I write for a living. Take a look.
I have a promise to keep to my friend Fiona Robyn who has recently published her new novel, Thaw. It tells the story of Ruth who is 32 and doesn't know if she wants to live to be 33 - she gives herself three months to decide... I met Fiona about eight years ago on a business course; she moved on and now has four books published - good for her, I say through gritted teeth.
Fiona is planning to publish Thaw as a blog, a month after it launches in paperback. She is looking for 1000 bloggers to help her promote the launch with a blogsplash. I promised to mention it here. Follow the links to find out what she plans and how you can help - she has some interesting tips for writers on her website too.
Another acquaintance is the award winning writer, Rory Maclean, currently researching his new book in Berlin. We'd lost touch for a while but recently caught up via his blog. He sent me a link to the astonishing picture below taken at a recent street party in the city. 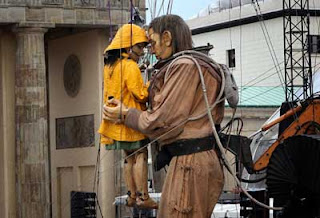 Photo from Rory Maclean
It is even more astonishing to think the Berlin Wall came down twenty years ago. I read recently that its collapse marked 'the premature end of the twentieth century' - that seems an astute observation, though I'm less sure that much has changed on our side of the wall. It's hard to know which of Rory's books to recommend, though my favourite is the quiet and charming Falling for Icarus, the story of his quest to build a plane while living on Crete. 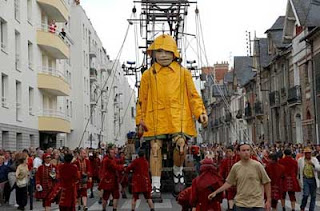 Photo from Rory Maclean
I am going to Wales tomorrow, back to Pembrokeshire, the sea, and hopefully to start writing again. I hear a Spoonbill has taken residence at Newport; the crows are certainly roosting at Lochmeyler; and the starlings - hundreds of thousands of them - are returning at dusk to their small copse under Plumstone Mountain. Everything in its place it seems, and just as it should be.
Posted by The bike shed at 7:39 PM