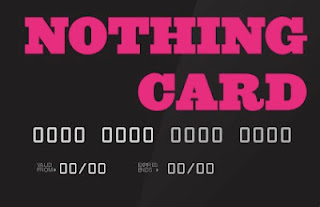 I learned too late that today is national buy nothing day. I'd have taken part, had we not already visited the hardware shop to collect a few bits for our builder - coming away eighty quid lighter! Still, it's miracle enough to have a builder in Pembrokeshire, so I'd probably have turned a blind eye to construction consumables even if we'd known in time.

I like the idea of buying nothing for a while. In fact, I'd be up for a buy nothing week, or even a month - except on reflection that wouldn't be very practical. But even if we only bought nothing for a day, what about the cost of electricity (does that count?) or consuming the food we'd bought the day before?

Truth is, these campaigns aren't meant to be philosophically or practically perfect; they are set up to highlight a particular issue - in this case, the inequality between spending in the developed and developing world. The point is not to so much to make an immediate difference but to encourage changes that have a more sustainable effect.

My own interest lies less in the wealth disparity of nations than in the misguidance of those who think consumerism is the answer to personal fulfilment. We know from scientific research that once a certain threshold is passed (and that point is critical), the relationship between wealth and happiness is actually quite tenuous. Most of us know too that the things which matter most, seldom cost a lot.

I've long fancied the idea of reliving the Butlins' promise of a 'week's family holiday for a week's wage' - and seeing if we enjoyed it as much as when spending vastly greater sums. Based on an average UK wage the only possible way would be to go camping at a simple site, spend the days walking outdoors, cook meals on a barbecue, have star parties at night... Wait a moment, that's what I like doing best!

Some years ago I met Satish Kumar, famous for walking, in the Sixties, from India to The West. He did so without any money, carrying a peace gift of tea for the world's premier leaders; he has since become a leading ecology and anti-consumerism activist. I remember him asserting in a panel interview, 'Life isn't better for having more things.' And when challenged to declare what was largest consumer item he'd bought in the last five years, he replied, None. Inspiring man.

Now I have to be careful here - very careful in fact. Because of course, I spend in much the same way as anyone else - on cars, houses, books, computers, clothes, builders' bits and bobs on a Saturday morning... I also have an excellent job and with that comes income well beyond the happiness threshold I mentioned earlier. I might think I'm not especially materialistic, but the hard facts are that I spend more than the average person in the UK, never mind the developing world.

But I hope I've retained a sense of perspective. I find it an irony and a sadness that so many of the highest earners I know are also those with the largest debts - and frankly the shallowest lifestyles. One of my life's ambitions is never to lose touch with simpler pleasures - if I ever start thinking that fancy restaurants are intrinsically better than a good picnic then I'll know I'm in trouble. Another is to cherish my relative security - valuing it above any thrill or ego boost which yet more possessions might provide.

Broadly - though I'd stress in the context of middle class comfort - I've held to those ideals, and try to encourage the same in my children. If spending one day spending nothing at all helps to reinforce those values, then I'm all for it.
Posted by The bike shed at 7:27 PM

Labels: About me, Alcohol Free, Politics