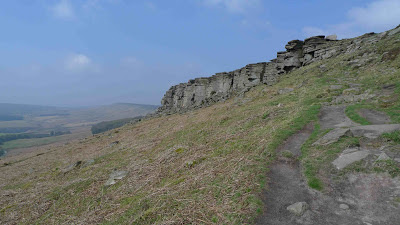 Today I drove down the coast of Wales. There must be few finer sea views than that from the road above Cardigan Bay. The arc of Portland to Lyme Regis runs it close, but the South Coast lacks the glimpses of Snowdon and Bardsey; the sense of imminent landslip, as if you could at any moment, tip into the void.

But for all I love the coast, it's the mountain and moorlands I associate most with edges. The very word in Derbyshire refers to the gritstone cliffs that ripple the landscape: Stanage Edge, Froggat Edge; Birchens Edge... Here there's been no meeting of land and sea in recent millennia; instead, there's a feeling of height (often more so than the map confirms), and, I find, an urgency to keep moving, as if the ridges 'need' to be tramped, rather than pondered on.

In Northumbria, where I grew up, the Whin Sill fault determines much of the line of Hadrian's Wall. I remember walking it with my maternal grandfather and him explaining how two ravens were using the ridge lift to maintain their glide. I think of him every time I watch birds hovering, wings to the wind.

The Whin Sill begins or ends at Lindisfarne depending on how you look at it. The other end or beginning is at High Cup Nick, above Dufton in the North Pennines. I went there a few years back, to walk the edge with Daniel. We sat by the downfall at the cliff's highest point, the ridge lift carrying the water upward from the cleft, spraying over our heads. 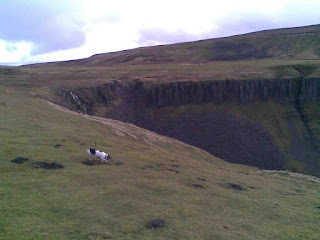 As I come to think, there are dozens of edges, in one form or another, that have been sites of significance and now memory: Striding Edge on Helvellyn (my first 3000ft mountain), Tossen Edge in Coquetdale (with my grandfather), Fan Brychieniog above Llyn y Fan Fawr (with Jane) Sharp Edge on Blencathra (with my dog), and Bowden Doors, and Curbar Edge, and Wingather Rocks, and Abereiddy, and the White Tower, and Pemmaen Dewi and the Black Cuillin and Aonach Eagach...


Come To The Edge

Christopher Logue
Posted by The bike shed at 8:51 PM