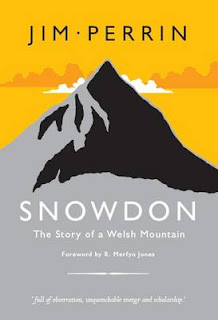 Today I took a day off work and drove two hundred miles through torrential rain, arriving after five hours in Llanystumdwy, just as they closed the roads. I'm here for the launch of my friend Jim Perrin's new book: Snowdon, Portrait of a Mountain.

But the operative word in that last sentence is not book but friend.

For in truth I'm not here for the book at all - I've already read it and know it's excellent.  And I'm not here to hob-nob with publishers or authors, though I guess it's a possibility. The real reason I've made all that effort, is because Jim is a friend and perhaps more than any other (and I've many to thank and be grateful for) he has encouraged and shown faith in me.

I was thinking this yesterday as I drafted an email to another author in which I wrote:

I've come to realise that whilst my book is important to me, it just isn't to other people - or more accurately it isn't to lots of folk I thought might have given it more heed. On the other hand I've had letters from all over the world; strangers touched by the stories and taking an interest I could never have anticipated.

Recently, I've understood that the friendships I've made are one of the most important aspects of my being a writer.  I'm making a huge effort to go to Jim Perrin's book launch in North Wales tomorrow, partly because he, above anyone, has been unfailingly supportive, but also because I want to go to the pub afterwards!

So tonight's post will be short, because it's not actually about the book, it's about friends and influences, and why they're important - important enough to make the effort, to offer some support in return, no matter how small that might be.

As they say, it's the thought that counts.
Posted by The bike shed at 6:27 PM