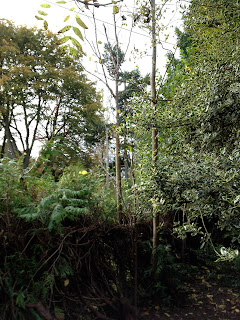 The prospect of ash dieback has caused widespread concern over recent weeks. Thankfully the press has highlighted the potential devastation rather than focusing on the attempts to make political capital out of the crisis. It's been helpful too in communicating the actions we can take to report possible cases. A garden blogging friend told me the other day that #ashdieback is now one of the most used tags on Twitter.

I'd like to think we can contain the blight - but I'm pessimistic. The whole affair is reminiscent of the foot and mouth outbreak - maps appearing on the website with a worryingly large number of dots for reported cases. Yesterday, the BBC carried an article advising walkers to wash their boots and hose down their dogs after visiting woodland with ash - oh, yeah, like that's going to happen!

My last post was about beetles and how few most people can easily identify. Trees are not far behind. My company recently moved to new premises called Rowan House - you'd think it was obvious and yet I had to point out to senior colleague this referred to a tree! How many in the office would be able to spot a poplar or a willow I wonder?

But as with beetles, identification is almost beside the point.

Earlier this week I walked the grounds of Lacock Abbey - visitors might not know the names, but they know the immense trees that grow there, and to think of them gone is beyond horrific. Ash trees used to line the roads of the streets I grew up in - last to leaf and first to fall, my mother would say - and one of my earliest memories is making dens in the russet piles that the wind would blow to our garden. 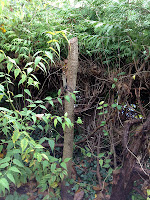 My garden now is full of trees: walnut, maple, beech and holly. There are firs too, some to be removed - and there are elms, five in fact.  Or at least there were.  This year two died from Dutch Elm Disease - it's near certain the others will go too. Elms still grow in the UK, but they invariably succumb as they reach maturity, particularly when emerging from hedgerows.  It is possible that by thinning the garden wilderness I inherited, I've inadvertently hastened the demise of mine.

At the advice of a tree nursery I've chopped one to a metre above ground - there's a faint possibility it will sprout again.  The other has had it, and needs removing quickly. I'm told the logs would burn if I seasoned them for a year - but even then they give little heat.  I shan't bother - apart from anything, it seems too sad an end.
Posted by The bike shed at 12:36 PM