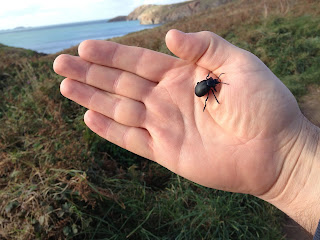 Beetles are extraordinary creatures. They are amongst our most beautiful insects, they play a vital role in our eco-system, many have astonishing life-cycles. And yet of 4000 species in the UK, I could put a name to less than a dozen.  I ought to know more about beetles.

Last Friday as I walked to St David's Head we came across this chap. He was crossing the coast path near to Porth Melgan, and looked vulnerable to birds so I gave him a helping hand. He's a bloody nose beetle, one of the commoner species in Pembrokeshire, and October is evidently late for him to be out and about.

Quite why I've decided this beetle is a 'he' I can't say, for in truth I've no idea of its gender. Identification is tough enough; sexing them damn near impossible. There isn't a fully comprehensive UK field guide, though to be fair, a huge number of those 4000 species will be LBJs (Little Brown Jobs). I generally use Michael Chinery's  Pocket Guide to Insects or even the (more truly pocketable) Collins Gem series.  Other than that I take a photo and try my luck on Google or one of the many insect forums.

But in a way, identification barely matters. 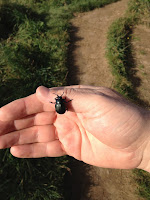 This particular bloody nose crawled over my hand, each step a soft and delicate placement, tickling my palm - his exoskeleton iridescent in the light. I thought he was gorgeous. If  I were forty years younger I'd have popped him in a matchbox as a pet! Bloody nose beetles are named for their habit of discharging a red fluid when threatened - this foul-smelling liquid deters predators. Thankfully he didn't spew up on my hand and I like to think he sensed I meant him no harm.

I laid him down in some tall grass by a drystone wall. He'll not survive the winter, but his larvae will, and next year there'll be more of these fascinating creatures under our feet - if ever we care to look.

P.S.  For one of the best amateur nature blogs I know, try following Wanderin' Weeta. Her self taught recording and identification of even the tiniest creatures is an inspiration and delight.
Posted by The bike shed at 1:00 AM