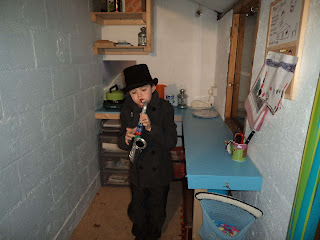 Earlier this summer in my shed

Three years ago this morning, I wrote a letter to Dylan. It was his fifth birthday and I published it here on the blog.  For all I spend hours crafting my lines, that particular piece took me fifteen minutes. It was published in my book; one day he'll read it and understand.

This morning he was eight, in our room at first light, delighting in his presents. Of course, he's bigger and the gifts are now largely electronic (as is the way), but fundamentally he's much the same - still looking to us, innocent and protected for all his worldly demeanour. With luck, we'll have a few more years of this.

Last night I spent some time with my eldest son - he's applying to university and asked me to scan his personal statement. In the early hours of this morning he went off on a trip to the Hadron Collider in Switzerland - very soon he'll be eighteen. He's his own person already but in his daily presence, he's still one of 'us'. We'll be lost when he leaves for good, and again when my second son (a year younger) does the same. Dylan will be just as bereft.

Outside it is snowing, the earliest I can remember. There'll be no cycling or walks in the wood today - instead, we shall play games, read books and have a party of sorts. The flakes look pretty on the window, but already they're heavy and melting.

Nothing lasts they say; treasure it while you can.

Here is the piece I wrote three years ago. 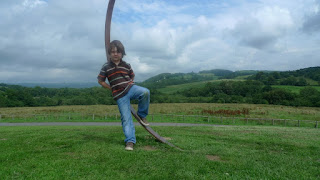 Five years. Has it really been that long?

It feels like yesterday and forever. So much life in such a short time.

So wrote Dylan Thomas, after whom you’re named. I wished you his genius if not his weakness. You have his charisma already, and his bombastic ways - you sing like a Welshman too! But I forgive you your faults, as I always will.

Strangely, I can't remember your birth, perhaps because it was so early in the morning. What I do recall is bringing you home. And your brothers sitting on the bed; looking not touching, just as they were told - then gently, one at a time, holding your hand. They wanted you to wake, but you slept through it all, oblivious.

Oblivious too of the years of yearning, the three miscarriages, the nuchal scans, the waiting for results, the tests and more tests - and the waiting - always more waiting - until the final phone call. And when it came, the nurse asked if I was sitting down.

You see that's the thing about probability - it doesn't work in the real world. There is only one you and you were always perfect. Just like there's no probability or quantum for love: you either do or you don't; all or nothing, no half-measures. And every day you remind me of that simple, inexpressible, fact.

Happy birthday Dylan; it's the least and the most I can say.