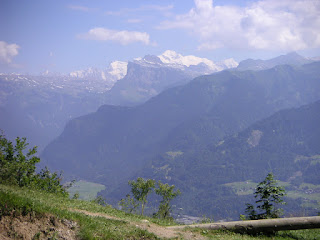 Sorting through my files for some blog inspiration I came across a collection of cycling articles I wrote years ago. They were never published; I'm not quite sure why I wrote them.

Reading them today, they seem crude, not as crafted as I'd like - and yet they have a certain something. It seems a pity to leave unseen them in the depths of my hard drive. As I struggle through November's 'Post A Day' challenge I thought I might share a few. 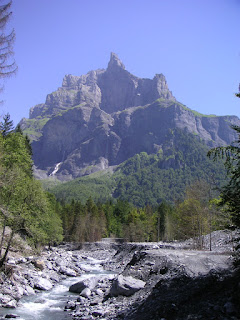 Have you ever had a perfect day’s cycling?  The sort when the sun blazed in a cobalt sky, waterfalls cascaded from silver peaks, flowers danced in the fields and a light breeze cooled your brow as you crested every hill - a day so brilliant that it’s etched on your memory?

It was our transfer day: we had been in the Alps a week and we're moving from Chinaillon, a small village, half way up the Col de Colombier, to Le-Biot, an even smaller village about sixty miles and two mountain passes to the north. Jane agreed to take the boys in the car while I would ride and meet her at the hotel that afternoon.

The sun was up and warming my back as I set off down the tight hairpins to Grand Bornand; five miles of adrenaline, my brakes screeching on every corner.  I barely turned a pedal for the ten miles that followed, gently freewheeling down the Eveax Gorge, the road hugging its damp walls and twisting slowly through hamlets and farms to the broad valley of the river Arve.

At the lower altitude, the breeze was hot as a hairdryer as I peddled along the banks of the river Arve, a cool mist rising from its gelid waters. Swallowtails flitted on the roadside thistles and in the distance the shadows of the Col de Ramaz loomed. A week before the Ramaz had been part of the Tour de France - Richard Virenque taking the stage and the yellow jersey with a solo breakaway.

I climbed quickly through the orchards and ramshackle farms of the lower slopes, the road steeping at every turn, sweat dripping onto my bike frame.  The tarmac was covered in slogans: Allez Lance, Vive Morreaux, Ullrich est God. So much for the Gods!  I was down to five miles an hour, desperately stuffing energy bars and slugging water, my hands gripping the bars ever tighter. 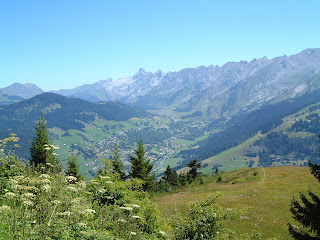 The final kilometre is a suspended belvedere, hewn from the side of a ravine.  It is unremittingly stepped, but by now I’d lost any thought or care about speed.   Below, the valley where I’d begun the climb looked like a model railway, whilst above me waterfalls cascaded through fissures in the limestone cliffs.  In almost surreal contrast, a forty-foot high polka dot jersey had been left hanging from two trees that clung to the side of the summit gorge.

At last the top!  A stunning panorama of Mont Blanc, clearer than I’ve seen it in twenty years: each of its needle peaks reflecting the sunlight with dazzling brilliance.  I put the bike down and stood there open mouthed – barely a sound, save for my heartbeat and the ticking of a thousand crickets in the grass.

The tarmac was actually melting as I began the descent.  Loose grit was sticking to my tyres and with the memory, fresh in my mind, of a high-speed blow-out on the Galibier, I took it easy, stopping often to cool the rims.  A few cyclists were grinding their way up the cooler Northern slopes -they passed in a blur, as I topped out at forty five mph, nearly missing the narrow junction that marks the start of the Col de L’Encrenaz. 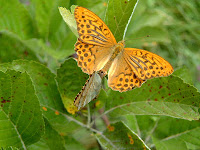 The L’Encrenaz isn’t used in the major tours and, as a result, isn’t well known by cyclists, but it’s my all-time favourite nonetheless.  The narrow road, never too steep, is lined with fragrant pines, and interspersed with traditional farmer’s chalets complete with beehives, vegetable gardens and water fountains.  An old couple sat playing cards and drinking wine in their garden – at another chalet, a couple were chopping wood, wearing thick woolly jumpers and jackets.  As I crested the Col, three eagles circled above me, piercing the silence with high-pitched craws.

After that, it was another screaming descent: three thousand feet of clear road to Morzine and the valley of the river Drance. I whooped and grinned as the familiar villages passed in seconds, limestone peaks glinting in the background.  I was still grinning, and sprinting even, as I climbed the last kilometre that takes you past the local fromagerie, to the tiny commune of Le Biot.

The ride had been fifty-seven miles, ascending two major cols with six thousand feet of climbing.  It had taken me just under five hours; every minute in sunshine, every view sublime, every breath of air as clear and clean as the mountain streams.

I dipped my head in the water trough outside the hotel and rose to be greeted by a hearty slap on the back. 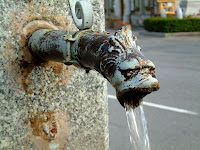 “Bonjour.  Bonjour Mark”, it was Fernand, our hotelier and an old friend. “Was it a good bicycle you have been having today - you mad man?”

“Perfect” I replied, water dripping from my head, snot hanging from my nose.  “Absolutely perfect!”
Posted by The bike shed at 6:38 PM