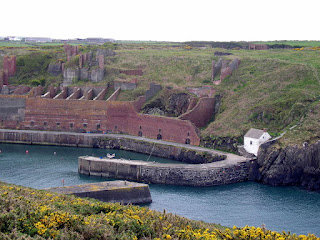 To the west of the picturesque harbour of Porthgain is an old granite quarry. It once supplied roadstone that was first crushed then shipped up the Bristol Channel. Never a commercial success, the quarry closed in the1930s; its greatest legacy is the industrial archaeology which helps define the village today - a patchwork of abandoned tramways and derelict buildings that could be Pembrokeshire's version of a spaghetti western film set.

When the quarry closed, you'd not have bet on Porthgain becoming hit with the tourists. Yet today, the Sloop Inn is the best pub for miles; there's a renowned fish restaurant, a couple of galleries, some old anchors on the village green ... Cerys Mathews had her wedding reception here. And from the harbour, it's less than two miles to Abereiddy and the Blue lagoon, on a path that's a high contender for best coastal walk in Wales.

The village attracts thousands of visitors every week, but I'd bet that less than one in five hundred ever ventures into the quarry. There's a geocache there now, so perhaps that should be one in three hundred; who knows, the point is most folk walk by, despite the coast path skirting its western edge. Part of the problem is that to reach the middle tier requires an ungainly scramble, and the lower platform a moderate rock climb. In a way it's a pity because the quarry is the ultimate relic of Porthgain's past - it's also one of the best micro-sites for wildlife, due in part to its relative isolation.

We went there yesterday evening - to look for peregrines. Dylan insisted on playing Lord of The Rings - he was Gandalf, I was Gimli, and Jane, 'that girl with the frizzy hair'. In between his thunderbolts and wizard spells, we sat with our backs to the sharp granite boulders facing the pale horizon of the sea. There was no wind under the cliffs, the afternoon's clouds had cleared; a rose chested bird was hopping between the boulders. 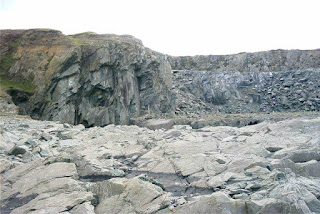 The bird was a wheatear; there were whinchats too, swallows and martins swooping over the edge -  no choughs which bred here last year; no ravens either. They say if you can't see the peregrine you should look to the sky - I did, but the sun was too bright. And so as Dylan fought his second battalion of Orcs, I found myself reflecting on how this place was at it's commercial height.

Pretty hideous I expect. Photographs in the Sloop show gangs of labourers, sledge-hammers in hand - even the tramways were once hauled by men - none of them look fat and they all look older than I suspect they are - there were no pensions those days. The landscape I love so much would have been little compensation for the toil of hewing rock under the constant threat of lay-off as the quarry lurched from one financial crisis to another. Back in Porthgain, the two room cottages that are now considered too small for holiday lets, would have housed entire families. 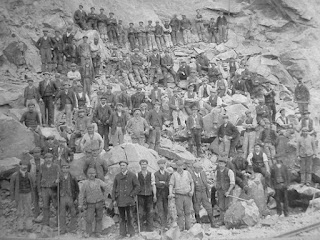 I'm no expert on the history and importance of this quarry, but I'm pleased that the National Park has not interfered with the headland. It's a small delight that the buildings and tramways are not being prettied up and museum-ified, and heartening that the quarry hasn't been cordoned off for health and safety concerns. None of this is for lack of care on my part: the industrial past is part of what makes Porthgain so special (interestingly, we find visitors either 'get it' or they don't - no middle ground) - but in my view, you understand that best by getting close, not by reading information boards. The landscape and wildlife are important too - and nature's slow reclamation of the quarry has added not taken away. By leaving well alone, it seems to me we are honouring both sides of the equation.

Having had enough of being Gimli and the frizzy girl, we left the quarry and walked to Ynys Barry cliffs. There was an enormous oil beetle on the path (be careful where you tread - it's a species at risk but holding out in coastal regions) - we picked it up, letting it crawl from hand to hand between the three of us, before placing it carefully under some gorse. If I had more time I could easily become fascinated by beetles - astonishing little things. The shadows on Garn Fawr were darkening to purple - the peregrines had not returned but it didn't matter.  We made it back to the village with just enough time for haddock and chips on the harbour walls.
Posted by The bike shed at 10:23 PM