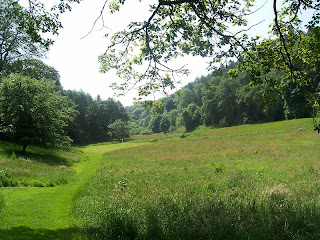 The other day I saw a shrew. It was a fleeting glimpse and such a tiny creature - which leads me to think that maybe it was a pygmy shrew - that had I blinked I'd have missed it. At the time I didn't give it much thought, but afterwards, I began to consider the sighting more carefully.

I can't remember when I last saw a shrew, and to be honest, I'm not absolutely certain I'd seen one in the wild before. I suppose I must have - I recognised it instantly, and shrews are relatively widespread mammals aren't they?  But if you asked me to pinpoint when or where I'd be a bit stumped. Before last week, it's just possible I'd only seen pictures of them in books.

This shrew was in Colby Gardens in Pembrokeshire, snuffling for worms under a sheet of galvanised metal that I happened to lift up. In a way, it was lucky I came along because the sheets are placed to attract snakes which would happily accept a shrew-sized meal. Last spring, lifting the same sheet, I found the most gorgeous grass snake, chocolate brown with a golden band like a collar around its neck - not that snakes actually have necks as such.

When I disturbed it, the snake slid unhurriedly into the surrounding meadow, reluctant to leave its warm den. But last week's shrew took a more panicked flight, scurrying to an escape tunnel and wiggling its bum in a last goodbye. An extraordinary little thing I thought, ludicrous in its way, like a tiny vole with Pinocchio's nose. Next moment it was gone.

I'd always thought shrews were a type of mouse, but evidently, they're more closely related to moles. And like moles they are fiercely territorial, only coming together to mate. They have the greatest ratio of brain to body size of any mammal, including humans - and they need to consume their own body weight in grubs every day. One web site I came across, claimed that if a shrew doesn't eat for two hours it will die. I presume the author means if it goes longer than two hours between meals rather than actually eating for two hours! And some species have venomous teeth, which no doubt the author of that website would wish me to experience for being so darn pedantic.

It occurred to me that most of our wildlife encounters are fleeting, especially of mammals. I'd guess the popularity of bird watching is at least in part because most of them will actually allow for a decent viewing. In contrast, I remember Jane lifting a flagstone in our garden and finding a nest of baby dormice - so as not to disturb them we replaced it immediately.  As such my lifetime's total of dormice watching is three seconds! Last year I saw my first polecat in years: five seconds. And then there was that weasel which ran across the road as I was driving...

It turns out that encountering a shrew is quite rare after all. They may be commonplace (pygmy shrews less so) but field sightings are definitely not. You need to be in the right place at the right time. And if you're lucky enough for that to happen - then unlike the shrew, which is virtually blind and relies on sounds and smell - try not to blink.
Posted by The bike shed at 11:10 PM