Restoring the faith - at least, sort of. 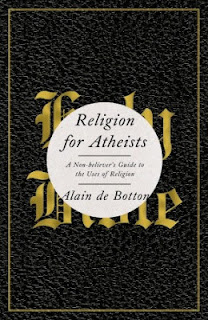 There's a certain irony to sitting down on Good Friday to review a book that's ostensibly for non-believers. But then Alain de Botton's latest collection of essays, Religion for Atheists, is not quite what the title might suggest. It's certainly not a rant at Christianity and to my mind, much of what it says ought to be of interest to the faithful. It would be a neat parallel to the book's central theme, if, by the time you've finished this post, you've concluded that maybe Good Friday wasn't a bad day to publish it after all.

De Botton's starting point is that for him (and arguably for the majority of people in the developed world) the supernatural claims of religions can no longer be taken seriously. Thereafter, he doesn't waste a sentence in examining the scriptures or weighing respective claims of redemption and afterlife - nor does he seek to judge the historical influence of religion on society. For though these issues may be important in other contexts, they are not relevant to de Botton's aim - which is to argue that even if we accept the ills and falsities of religion, it still has much to teach us about living a good life.

A philosopher friend of mine can barely say the words 'Alain de Botton' without sneering. I'm sure this reflects the views of many professional thinkers - his essays are relatively lightweight; not in the same league as those wrestling with issues of consciousness or logic. But then few professional philosophers can write as engagingly and with as much practical relevance as de Botton. His target is not those concerned with the minutiae of academic debate - it is people like me; people who alongside their everyday life, find themselves pondering its absurdities and sorrows, as well as its joys and purpose.

In a series of essays, accompanied by witty illustrations, de Botton argues that religions, in the way they are organised and practised, in the way they educate and guide, have much to console and inspire us. He challenges non-believers to look again at the positive aspects of religious community, at the need for rules and boundaries, at the merits of religious architecture, at the power for good in institutions. In doing so, he gently exposes the cracks in our egos, giving voice to inner desires for comfort and structure. I especially liked his take on Catholic saints and souvenir icons -  suggesting even the tackiest of figurines can serve a purpose in reminding us daily, of the virtues we desire.

If I am honest I opened the book with deep scepticism. I wrote recently of my own lack of faith, at my incredulity at those who seem able to embrace it, despite the absence of empirical evidence or a deductive logic that is consistent with the way we make everyday decisions. As de Botton introduced his ideas I could sense myself bristling, searching for errors and inconsistencies - but the more I read, the more it occurred to me that de Botton was answering one of the few questions of belief that gives me pause for thought: why is it that so many of those whose views and approach to life I most admire, turn out to have faith?

It would be easy to criticise these essays. An obvious line is that de Botton cherry picks the most positive qualities of religion as suits his purpose. He does not mention those more unsavoury aspects that its proponent would have us contextualise or consign to history. But this would be both churlish and to miss the point. Religion for Atheists is not about belief, nor is it about the sociological merits of religion - it is about what might help us lead a good and flourishing life; it is about the consolations we crave in the face of what, at times, can seem an overwhelmingly pointless existence.

In this way, the essays are a continuation of de Botton's previous books - each of which uses a thematic 'hook' (love, work, architecture, travel, even Proust) to address much the same issues. A fair criticism would be that he is reaching the limits of this theme - at different times, Religion for Atheist seemed to be either stretching the point or too obvious in his choice of analogies.  In my view, de Botton's earlier book, The Pleasures and Sorrows of Work was subtler, wittier and ultimately more revealing in its consideration of modern life.

There are undoubtedly some who'd describe Religion for Atheist as full of 'stuff and nonsense'; too highfalutin or contrived to matter.  I'm not so sure. I love life, and with luck, I might sustain mine for another thirty years; my youngest son, whom I adore beyond words, can expect to reach ninety. Yet in a wider temporal context that is barely a blink of an eye - in three generations we will all us be forgotten. If I thought too hard about this I could quickly come to tears.

As an atheist I can take no comfort from the prospect of an afterlife - my concern is how to make the best use (in every sense) of the limited time I have.  And to my surprise,  I found myself agreeing with de Botton: whilst religions may be wrong in their transcendental promises, they do still have something to teach us.
Posted by The bike shed at 5:49 PM