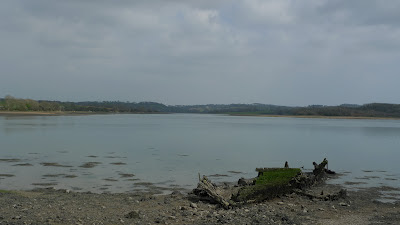 If you mention Pembrokeshire to most people, they'll almost certainly reply with a comment on the beauty of the coastline. That's understandable, for it's the cliffs, coves and islands that dominate the tourist brochures, drawing thousands of visitors each summer. The coast is synonymous with the county and yet, one look at the map shows there's more to the National Park than a ribbon of land by the sea.

To the north is the Preseli, a line of hills-cum-mountains, best known as the home of the blue stones which form the inner ring of monoliths at Stonehenge. The Preseli hills are under-rated, but they are not the subject of this post, for even high on the ridge the sea accompanies your every step: it defines the horizon, it shimmers or dazzles according to the light, and in the evenings, it draws your eyes to the dying sun.

To find a truly different view of Pembrokeshire you have to head further inland. In the centre of the county, a few miles up river from Milford Haven and Pembroke Dock (two towns so industrialised that they're excluded from the Park) is the Daugleddau Estuary. This is the secret waterway: forty miles of rivers and reed beds, castles and mills, tributaries and mudflats. All roads lead to a watery end - to cross the channel you must divert north or pay the toll at Pembroke bridge.

Yesterday we went to Lawrenny Quay, situated at the central junction of the estuary. The Daugleddau is a kilometre wide here - upstream it narrows only gradually, splitting eastward into the Carew and Cresswell rivers; further north into the Western and Eastern Cleddau. But the term upstream is a little misleading, for the river is strongly tidal and at low water the smaller tributaries (known as pills) are little more than runnels in the mud. The dominant flow is more of a gradual seep than a bubbling spate, helpful for heavy barges - years ago this waterway was busy with ships taking coal to Bristol and beyond.

A friend once told me the Daugleddau was the quietest landscape he knew. I'd beg to differ - it's true there's an immediate stillness, but in an aural equivalent of looking at the night sky, it takes only a few minutes for your ears to adjust. Once they do, there's a myriad of voices.

In the stunted oak wood to the north of the quay, there were too many trills and craws to discern. We saw wrens and long-tailed tits, an unidentified finch stabbing at the bark - there were swans and geese on the water, herring gulls too, a little egret by the far shore. The last time we were here there was a green woodpecker at Garron Pill. Yesterday a raven circled overhead, jackdaws strutted on the salt-marsh, rooks and magpies too - almost all the common corvids I said - and as if to prove it, I spotted a jay flying from tree to tree in the churchyard on the hill.

Birds are ever-present on the Daugleddau, but they are far from the only attraction.  Along our path, wood anemones made the most of the light before the canopy returns them to shade; a fern uncurled its first helix, everywhere were primroses, early bluebells, forget-me-nots and celandines. A small tortoiseshell was basking on the brambles, a peacock (butterfly not bird), made its way to the blackthorn blossom. There were plume moths, ladybugs, red spiders I couldn't name... 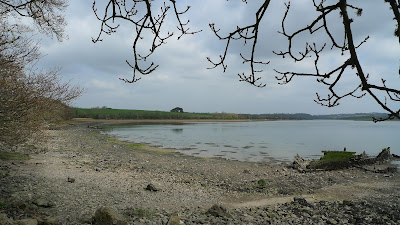 And then there's the landscape. The river was flooding as we descended to the quay - boats swayed on their moorings, a catamaran glided down the channel - the first sail of the year perhaps? To the east the Carew appeared motionless, it's mirrored surface glinting blue as the clouds parted, the bank-side fields dotted with lambs. All the scene lacked for perfection was an otter swimming to the shore;  I've long hoped to see one here, but though they are certainly present I've yet to be so lucky.

We're fortunate though, to know this place, to have it close and most times to have it almost to ourselves - apart from the wildlife that is. There is also one fine exception to the silence and stillness - the busy little cafe on the quay, which serves perhaps the tastiest crab sandwich and coleslaw side that I know. A delicious way to end a fabulous spring walk, and a gentle reminder that even in the middle of the county, the coast is never far away. 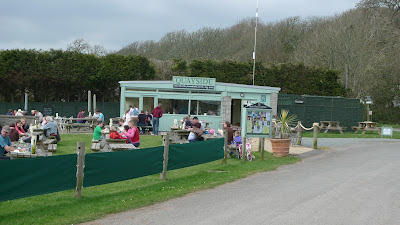 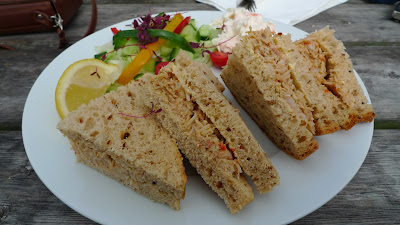