The water in Majorca... 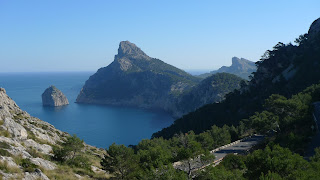 Those of a certain age might remember an old Heineken advert. It was a send-up of My Fair Lady and featured a Sloan Ranger being trained to talk in a cockney accent. She fails miserably until one swig of the amber liquid has her drawling, The worta in madjorca, don't tayste like it orta!

This last week I've been to see for myself- not drinking lager but riding my bike with Andy Cook Cycling. It was my first visit to Majorca, and before going I'd have struggled to say much about it.  If you'd pushed me I'd probably have ventured that Magaluf wasn't quite my kind of town! The truth is, our pre-conceptions of places are often pejorative and unfounded - and no more so than mine of this stunning island.

The day I left, my friend and blog-hero Michelle sent me an email vouching deep envy. She'd once worked on an environmental project in the mountains near Alcudia - by coincidence, where I was staying. She wrote of eagles and kites, of fabulous coves and of ancient monasteries in the hills. I saw all of these and more, riding 400km in the Serra du Tramuntana, through orange and lemon groves, under cobalt skies and a temperate sun. On Wednesday I rode to Cap Formentor, the northern-most tip of the island - mile for mile I can't think of a more scenic ride in thirty years of cycling. 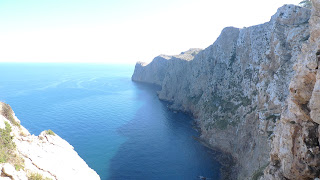 It's estimated over 80,000 bikers come to Majorca each year, providing an early boost to the tourist season. I vaguely knew this, but wasn't aware how comprehensively the island has embraced the influx: the resurfaced roads, the signed routes, the cafes with free oranges and cakes, the cries of hola from the locals. Add those to the mountain landscape and it is near enough cycling heaven.

You might suppose that hills and heat would make it more like a cycling hell. But it's surprising how the landscape inspires. One lady on our trip had never peddled more than 30 miles; she rode 100km with us on Sunday and beat me to the top of a 400-meter climb. I spent much of another day riding off the back with Andy, the trip organiser and a friend who goes back almost as far as those Heineken adverts. Confidence makes the biggest difference we agreed, and I thought how it applied to him too; he left a steady job to started his business two years ago, a leap of faith that's paid off in self-belief as much as financial returns. Hopefully, both will continue to grow. 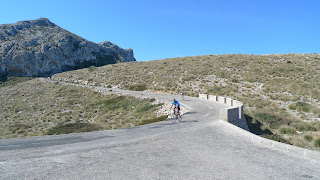 I came home on Thursday, into a damp Bristol with the usual queues and traffic jams. Today I rode the Fosseway in a southwesterly headwind, the sky inking and the temperature barely 6 degrees. Not quite cycling heaven, but just as surprising in its way. Recently, I lamented the ripped hedges on Common Lane and doubted there'd be bullfinches there this year. Yet as I turned for home, a male was calling from the top of a hawthorn, its peach-pink chest as dazzling as the Majorcan sun - actually, that's not quite true, but you know what I mean. 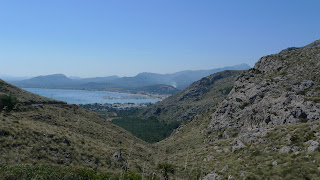