The passing and turning of wheels 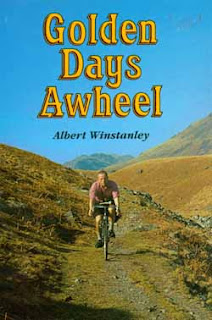 Albert Winstanley is dead, and so is Alan Oakley. I'd bet very few readers will have  registered the former (Albert died this March), and whilst you might have heard the news about Alan, I doubt you knew his name before today.

Alan Oakley was the chap who designed the Chopper bicycle: the best selling bike that Raleigh ever made. It was a Seventies icon that saved the business and wrought havoc to the testicles of twenty thousand teenage boys. I was never allowed a Chopper - they were for 'bad lads', my father used to say - and my pleas that it would be good for the paper round made no difference. Instead, he got me a twenty year old three-speed roadster which weighed a tonne and was laughed at the first time I rode it to school.

Albert was from a generation previous, and a writer not a designer. He rode a touring bike with a cotton duck saddlebag, a rolled cape strapped on top; the old photos show him in brogues and baggy shorts, about as far from the street-cred of Chopper riders as it's possible to imagine. Albert had toured across Europe when most folk were still heading to Blackpool for holidays - but he was best known for his forays in the North of England. In the unassuming columns of the Cycling Weekly and Cycling World his recollections of 'golden days awheel' captured a delight in the outdoors that was keenly felt by many of the post war generation.

I was twenty five before I could afford a decent touring bike. That hadn't stopped me cycling camping as a kid, or riding the hundred mile round trip to see my girlfriend when I was at university. My most vivid cycling memory is riding in Leicestershire through fields of oil seed rape. It was a new crop back then and I remember marvelling at the acid lemon landscape - and feeling more free and less troubled than ever before. I still love rape fields; I know they've replaced swathes of pastoral countryside, but I can't help it - every time I see them, I remember that day.

This evening, in the park near my house a group of teenage lads were skulking under hoodies and baseball caps. They came to sit by the bowling green, some way from the club house but near enough to provoke discomfort. 'Here's trouble,' said one of the members as the bowlers finished their twenty-first end. In the event, nothing much transpired; a bit of swearing, the odd kick to a litter bin, and then they departed, two of them on BMX bikes - the modern equivalent of a Chopper. Jane was annoyed they'd spoiled the peace. Bad lads, I thought, and though I know that's unfair for it's only youthful rebellion, I couldn't help it either.

It's stretching things to say that cycling has defined my life. But it's been a constant presence and, in many ways, my bikes, and the joys they've given me, mirror my journey too. There's a part of me will always wish I'd had a Raleigh Chopper; another that knows they were never for me. Just as there's a part that's delighted to see the thousands of enthusiasts riding cyclo-sportives each weekend; and another that thinks they should travel more like Albert...  with a saddlebag and rolled cape - through fields and fells that would harvest memories of gold.
Posted by The bike shed at 10:39 PM