A long and slow way home 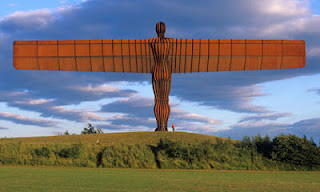 A friend of mine tells a good story about a kayaking trip he once led. In a remote region of the Himalaya, his expedition party came across an elderly English traveller. They exchanged pleasantries and my friend explained his plan to make the first descent of a white water canyon.  'Are you from Birmingham?' the old man asked. My friend nodded and the traveller paused before replying, 'You've come a long way to get wet!'

This Sunday I'm doing something similar, albeit on a smaller scale.  And I'm riding a bike not paddling a kayak, though judging by the forecast I suspect it won't make much difference. Next week I'm peddling from the English Channel to the Angel of the North; from Southampton to Newcastle, the most southerly and northerly of my company's operating locations.

It's a small joy of my job that I get to organise our community and charity programme. In June 2011, I rode from west to east across the UK (that's so 'last year', someone said the other day) raising money for Whizz-Kidz. This year, I'm raising money for the National Autism Society, a charity that's especially important to a colleague of mine.

Many of us will have raised money this way - it's become a cultural norm to ask for donations in return for completing some difficult feat or other. When you think of it, that's quite an odd proposition, but let's not get philosophical. The point I want to make is that few of those feats will involve the courage my colleague has shown - sharing her personal story, working with others and acting as an ambassador for a charity that has supported her autistic son.

Autism is a widely misunderstood condition affecting hundreds of thousands of people. At root it a developmental disability that affects the way those people communicate, how they relate to the world and make sense of what's around them. It's not strictly a mental or physical illness, and yet it can be equally devastating. The National Autism Society provides support, information, and services to help autistic people and their families better cope with the world.

The paragraph above is my summary description - easier to write that truly comprehend.

I've not done as much training for my ride as I'd have liked. Frankly, I'm overweight and unfit - yet I'm looking forward to it immensely. I'll be joined by colleagues riding for other good causes and for once the talk won't all be about profit and loss. And we're heading north, which has a certain resonance for me; every peddle-rev taking me nearer to the place I grew up. I haven't been back since my father died, but that's another and very different story.

I was thinking the other day of that traveller in the Himalaya and what he'd say if we met him?  Are you from Newcastle? he might ask.  I'd tell him I was. Well, that's a long and slow way home.