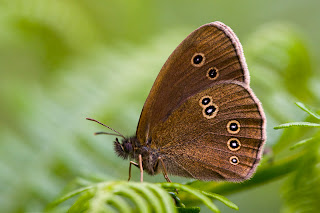 Yesterday was the start of the Big Butterfly Count, an excellent initiative organised by the nature charity, Butterfly Conservation. It's the third year they've run the count, which encourages thousands of ordinary folk to record the butterflies they see and post the list on a website. Last year over 210,000 butterflies were recorded over two week period and the information provides a snapshot of distribution and numbers across the UK.

This year the omens are not good.  After our wettest summer on record, it's feared that butterfly populations will have been devastated. David Attenborough, the charity's president, has encouraged people to join the count - if only to confirm our worst fears.

Last year I saw eighteen species on a single day - at Somerford Common in Wiltshire. This year, I've barely seen that many butterflies in total! There was a brimstone in the park in March, and I spotted an orange tip in April. A fortnight ago I rode my bike the length of England and, despite a week of relative sunshine, I saw only 12 butterflies. I have a huge buddleia bush in my garden which we carefully pruned to encourage more flowers. It has had no visitors. Pathetic.

So as I opened the curtains yesterday and saw yet more rain I was not hopeful. By midday it had cleared to a milky sky; warm but wet. We went to the beach at Newgale, flew a kite in the onshore breeze, then drove the lanes into town - nothing doing. On our return I walked the lane opposite my house that was once a drove road, hoping there might at least be some whites or a speckled wood - still nothing.

Butterflies, for all they are in serious decline, are actually quite robust to extreme-weather. We had a similarly bad summer in 2007 and numbers quickly recovered. If we get a reasonable autumn and a better spring we'll see an improvement next year. Far worse than the rain is the loss of habitat to industrial agriculture and the overly-liberal use of pesticides. It's the species on the brink that are most vulnerable to a bad summer- clinging on in isolated colonies, a wet few months can be enough to tip the scales; years of conservation effort wiped out by a few degrees shift in the jet stream.

So my worst year for sightings was being topped off with my worst ever day's recording. I was resigned to a 'nil entry', which the Big Butterfly Count website says are as scientifically valuable as positive sightings. That may be so, but they're crap for the spirit. Spotting a butterfly is always a little moment of joy - with the exception of cabbage whites to allotment gardeners, nobody dislikes their arriving. A summer without butterflies is the visual equivalent of a silent spring.

And so my pulse leapt as I spotted a brown flicker over the hedge between our garden and next door. Five seconds later and I'd have been indoors. It was a ringlet: close relative of the meadow brown, family Satyridae - common throughout the UK and distinguishable by a line of bright rings on the underside of the hind wings. It's one of the very few butterflies that takes to the wing in overcast weather. For all that the guidebooks will tell you it has a velvety sheen on emergence, most adults are rather dusky and look as if they've been battered in the wind.

I didn't care. I'd seen a butterfly; and what's more, I'd recognised it from a passing glimpse, verified when it landed. I felt pretty cool, buoyed up even. I went inside and recorded it on the website - one of three contributions from Pembrokeshire.  There were eight ringlets spotted in the county - second only to the meadow brown of which there'd been ten. It's a depressing picture, but not without hope.

Today I walked to the white tower at Porthgain - one of my favourite places and pictured on the title of this blog. Dylan was with me, demonstrating how to master a wizard blast and shield block if ever I were attacked by a goblin. He cast an imaginary spell over the harbour - I summon 'rays of light' he roared. And as he did so, I saw the tell-tale flash of brown and orange eyes on a shard of volcanic rock. I ran over and they moved to a sprig of heather. It was a grayling - my favourite of all butterflies - this year's offspring of a small colony that thrives on the North Pembrokeshire cliffs.

If you visit the Big Butterfly Count website you'll see a nil sighting from Porthgain - that's because graylings weren't on the tick-list. But they are there, despite the weather and despite my worst fears - even Dylan showed a passing interest. You can too - all you have to do is look. 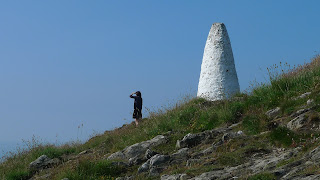