Intermarche - and the delights of rural France 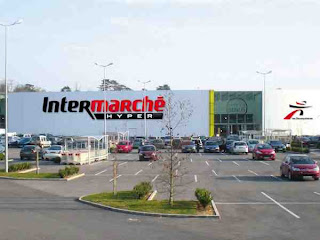 This week I’m in France. We’ve hired an old rectory near to Verdun on the Meuse, a stone’s throw from the Great War battlefields. It’s not an area I’d normally choose, but Jane liked the look of the house on the internet, and I‘ve been working on the final draft of my book – we stay in a lot, the boys swim in the pool, and every now and then I add to the list of butterflies I’ve seen in the garden.

One day we made a trip to Bar de Luc, a renaissance town to the south – it was beautiful but deserted; like a Georgio de Chirico painting. Yesterday we visited the war memorials; equally beautiful in their way, though oddly disconcerting as tourist attraction.  It’s been hot – walk only in the shade hot – and to be frank, the landscape is less than inspiring. Every day, what I look forward to most, is our trip to the supermarket.

At home Tesco is a chore – aisles of choice but no inspiration; I shop there in a dash, sticking to the list and finishing before most folks have eaten breakfast. But in France I linger. And not so much at the vegetables, meats or cheeses, as at the house-wares and stationery, the garden equipment and DIY displays – even the Tupperware boxes.

Yesterday Jane found me watching a five-minute video for the ‘Nicer Dicer’, a sort of Mandoline slicer that we decidedly don’t need. There was a smaller version called the ‘Magic Garlic’ that was equally unnecessary, but strangely tempting.  She was getting impatient: What did I fancy for dinner? Do we need any more butter?

I especially like the brushes. They’re different to ours – more like brooms, and they have nifty handles that are better for hanging on pegs. We don’t need any but that’s not the point – we don’t need half the clothes we own - so I put one in the trolley.  It falls out and I reluctantly agree it’s too awkward to transport.

The stationery next catches my eye – there are shelves of cheap exercise books, filled with squared paper (not lined).  This makes them somehow more attractive, almost exotic.  I don’t need any notebooks either, but again I linger – I’m sure I’d write more if only I had some of these.

It’s an oddity of coming to France that I enjoy their supermarkets.  Or is it? Because sometimes it’s in the everyday things that we experience the biggest difference. I once met a couple of German cyclists who’d compiled a list of English eccentricities – driving on the left of the road, salt dispensers with only one hole, front brakes on the right (that’s a cycling thing, but almost everywhere else does it the other way round), unelected House of Lords…

Today is hot again: too hot to go anywhere. My list of butterflies has stalled at the mid-teens and I’m sitting in the shade writing this – if it were not for the heat I could be just about anywhere. Except on my left is a Tupperware box with, I notice, has a rather clever design of lid - and an unusual knife sharpener that was especially effective when I used it last night. Come to think of it, we could do with both of those at home.

Jane, do you fancy a trip to the Intermarche…?
Posted by The bike shed at 10:59 AM