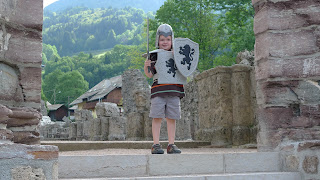 I was twelve when I first saw the Alps. It was the 1970s and my parents had booked a package holiday to Interlaken - and in fairness to them, it proved to be one of the most influential weeks of my childhood.  If I rummaged in the attic my souvenirs would still be there: a faux alpine horn, a pennant of the Cantons and a plastic 'view-cam' with images of the Bernese Oberland.

We never returned to Switzerland, but as soon as I was old enough, I caught the train and spent a month visiting Lucerne, the Jungfrau, Lauterbrunnen, Grindelwald... In the thirty years since I've returned more times than I can easily remember. To my boys 'The Alps' is synonymous with holidays - we don't 'do' Spain or Greece, they say, Dad just does France (or occasionally Austria).

Last week we returned to the Haute Savoir, near Morzine. It was where we came for our boys' first trip. This year there were tentative suggestions of going elsewhere - and at Jane's insistence, we'd spent the previous week in the Lorraine region.  Whilst this was a pleasant change, I was all the while itching to get to the mountains.  Arriving at a fabulous chalet on the outskirts of  St Jean d'Aulps, I felt like I'd come home.

Most British visitors go to the Alps in the winter, to ski in the high resorts; an annual fix of adrenaline and biting blue skies. I've only been once - and even that was a freebie - for I don't like skiing, and I like even less what it does to the landscape, though I'm realistic enough to understand that the idyl of an alpine wilderness is long gone. I'm aware too that one of my great loves is cycling, and that's only possible because of the roads and tunnels and engineering masterpieces that are the summer equivalent of lifts and pistes.

But for me the Alps has become more than just landscape - it is a place intimately tied to memory, to rights of passage, to moments of joy (and occasionally terror) that are milestones in my life. I have a vivid memory of sitting at the Serlesjoch in Austria, aged twenty one, and calculating that if I could spend an annual fortnight in the mountains I'd rack up more than a year by retirement. At the time I dreamed of extreme mountaineering, and over the years I've done my share - of kayaking too - but precious as these memories are, they are only part of a picture.

Last week was blistering hot; the evenings thick with thunder. One night the valley was engulfed by a storm and my three boys stood on the terrace, 'conducting' the lightning as if they were Gandalf -  daring each other to brave the hailstones and stand, arm erect until the next bolt hit the ground. They were laughing and drenched to the skin, and Jane joined in too as Dylan screamed and delighted in the game. At the end of the week (typical of us) we made a list of our best moments - this one topped the rankings.

I have a hundred memories like this: of bathing our boys in a plastic Sainsbury's box on that first camping trip; of running through a picnic site to catch a Purple Emperor, oblivious to the onlookers who must have been thinking 'whose that nutter with the net'; of Michael, aged ten, pulling ahead as we cycled the Col de Joux Plan, his blue jersey fading to a speck as he rode beyond my reach.

I spent a large part of this holiday playing the role of 'Daddicus', second in rank and general lackey to 'Commander Dylan', the leading character of my youngest son's 'talking game'.  Playing along is a pre-requisite of getting Dylan (who has, shall we say, a limited appreciation of nature) to go walking in the hills. Why do you like best about the game? I asked, expecting a reply about pirates or aliens (for we face a wide variety of enemies).  Being with you, he replied, and I could have melted.

On Friday we visited the Abbey des Aulps, where Jane and I reflected on our week. It was probably our last family holiday she said, a tear welling up. And as I write this paragraph, Daniel has just left the house to take his driving test; next year he'll be at university - we are back to the Internet, to evenings in separate rooms, to friends and girlfriends...

We were leaving the Abbey when Dylan ran to the crumbling archway, holding his toy sword aloft. Take a photo he cried, striking his best Commander pose. I remembered how three years earlier in that exact spot, he'd made the very same request. As I look at the pictures side by side I wonder if there'll be time and chance for one more in the series. I know that all things must end, but at times like these, I wish not yet... not quite yet. 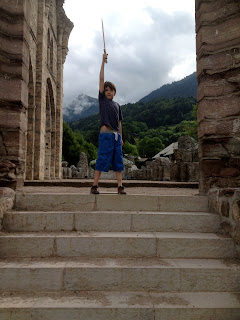 Labels: About me, France, Mountains