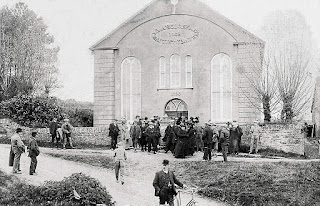 It's impossible to travel any distance in Wales without coming across a chapel. As late as the early twentieth century up to three quarters of the population attended nonconformist congregations; they're in every town and village, encompassing denominations from Methodist to Baptist to Presbyterian.

The chapel above is at Llangloffen, very near to the nature reserve I visited recently. That same day I took a photo to show how it looks now - there's been little change, and I suspect that the farm which stands opposite and out of shot is much the same too. It has a cobbled courtyard, a rookery, a look of run down despair. 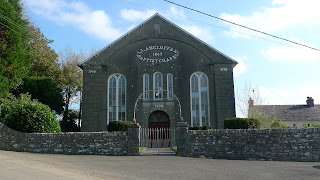 But of course, the biggest difference is the people and not just the way they dress. Had I taken my updated shot on a Sunday there might have been half a dozen cars and perhaps twice that in attendees. It's been said that most chapels are waiting for the last of their faithful to die before shutting the doors. Today there are little more than 100 nonconformist ministers in Wales.

I can't complain; I don't attend and its unrealistic to expect the organisations to keep them going. The communities that sustained these chapels, and the values that went with them, have gone or are disappearing. And it's important not to be sentimental too; sepia photographs give a sense of nostalgia but anyone reading the stories of Caradog Evans or Patrick O Brian's first novel, Testimonies, would be warped to say that the society they depict was wholesome. Chapels, like all powerful institutions throughout history, had a dark side.

There are, of course, some iconic ones that are worth preserving. The chapel at Mwnt is an historic monument and the wonderful Soar y Mynydd is the exception that proves the rule about isolation and decline - it remains an active chapel despite the flooding of its catchment to create the Llyn Brianne dam. And I hope the Brynmawr chapel at Betws y Coed manages to keep going - for it was there, twenty years ago, that I married Jane on a day when it rained enough to launch an ark.

But the chapels of Wales are not quite dead yet. Many have been converted to houses, others taken over by Friends of the Friendless Churches; some have become craft centres, art studios - that sort of thing. And some continue as active congregations. On the day I visited Llangloffan there was a funeral taking place in nearby Mathry - the cars had filled the village, the approach roads were lined with pickups, one farmer opened his field for parking.

I heard there were hundreds who couldn't get a seat. I heard too that they'd sung the hymn, Dyma Gariad Fel Y Moroedd,  Here is love, vast as the ocean.
Posted by The bike shed at 8:56 AM