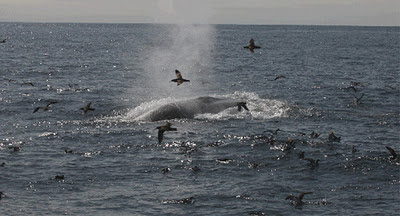 Fin whales off the Welsh Coast - image from Wales online


'What's the difference between envy and jealousy,' my son asked me this week. He had a new girl friend with him (note the separation of those words) and they'd been joking about my pedantry with language.

I played along, explaining that in common usage the two are now interchangeable. But technically, envy is a desire to have something others possess; a regret that it's beyond our reach. Whilst jealously is a fear of loss, a desire to hold on to what we already have - that's why we talk of jealously guarding.  'So you can envy someone's talents,' I explained, 'and still be jealous of their affections.' His new friend smiled and I left them to it.

This is a highly contrived introduction to my watching some nature programmes later in the week. The Frozen Planet was amongst them, but I'm also a late night addict of those documentary repeats on Sky. And the tendency when watching, aside from wondering at the diversity of life (and the photography that captures it), is to be envious of what's elsewhere - to wish we could experience it too: imagine, I said to Jane, the thrill of seeing a humpback whale.

Or a bird of paradise, a rhino charging; a colony of penguins. I watched this week, a piece about birdwing butterflies, laying single eggs on the leaves of particular vines, their caterpillars growing poisonous spikes that deter predators, at least if you're second in line. And all of this was fascinating and awe inspiring - and, frankly, beyond me, at least for the time being.

But on Friday I turned to Autumn Watch, the BBC's flagship of nature at home. This week's show was about the coast, and coincidentally to my envy, it showed Iolo Williams watching fin whales off Ireland, pods of dolphins following his boat. There were whales at Strumble this year too, and sunfish - and basking sharks passing regularly, occasionally turtles. It's good to be reminded of what we have here. But for all the magnificence of the rarer sights, I think it's the birds of which we should be most jealous.

There's a blog that lists local sightings, and on Thursday, four observers recorded.. two woodcock at Porthclais, along with great tits, coal tits, blue tits and blackbird. There were lapland and snow bunting on Skomer, a ring ouzel and a black redstart. At Castlemartin were sparrow hawks and kestrels, 600 lapwing, curlew, snipe, teal, shoveller, 10 choughs, 200 greenfinch, 150 linnets, 100 chaffinch and a few goldfinch. St Davids saw a Merlin in addition to some others above.

And this evening I'm going the three miles to Plumstone, for a clear night's forecast and I've noticed the starling gathering in our fields. At about 5.00pm, if I'm lucky, they'll fly to a small copse of trees on the edge of a nondescript moor. By December they'll be arriving in millions; the road will be white and the woods stinking of lime, and the raptors will be waiting too. It's one of the best sites (and sights) in Wales; something to be jealous of indeed. 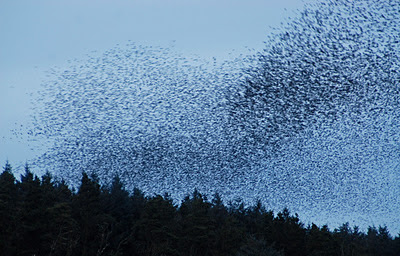