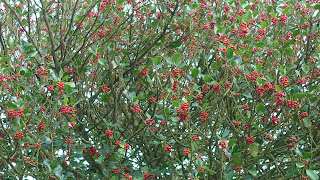 I wish I knew more about berries. I adore jam, of that I'm certain - but other than the obvious, I never know which berries to pick and which might kill you. It's a pity because they seem to be everywhere this year.

In my garden is a sizeable holly, its berries are toxic though I never knew that until today. Not that I've eaten any, but then it wouldn't occur to me to eat rose-hips either, or the berries of hawthorn and mountain ash - all of which, evidently, you can. Wild honeysuckle is fine too - though some care is needed with modified varieties.

For my fiftieth birthday I was given some Keepers Tipple, a combination of whiskey and whinberry, traditionally made from berries picked on the Blorenge near Abergavveny - very nice it was too. Also in Wales, mountain ash berries were once brewed into an alcoholic liquor called diodgriafel - which perhaps explains why it never caught on.  Elderberries are still used today, and the sloes we collected last week will make for fine gin and jam this Christmas.

But the trouble with collecting more good ones is that I'd get mixed up with the nasties. The berries of the yew (or at least the seeds within) can be deadly, and plants such as bittersweet, spindle and butcher's broom are regarded as highly toxic. So too are ivy, dogwood, lily of the valley and deadly nightshade.

The real the problem, of course, is that I got all that from a book and the Internet. In the field, I'd not know one from the other - or at least not be certain. And even if I was, I'd worry a fox or rat had laced them with Weil's disease.

So I think I'll stick to old favourites - and the winter fruits compote from Sainsbury's. I suppose it leaves more for the birds, and to brighten the woods, as they have done especially this autumn.
Posted by The bike shed at 7:17 AM