Of birds and worms and other beasties 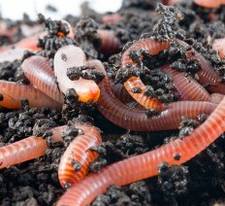 My work colleague Kerrie has a fear of birds. Like the dead reincarnate, she described them today, adding that she'd had to turn away from watching Frozen Planet because she couldn't stand the penguins. Those horrible pecking beaks, brrrr... they're evil. We laughed at the ridiculousness of her phobia, but it's real nonetheless.

Jane doesn't like worms, she goes cold at the thought and won't like the picture above. So, of course, the big boys delight in throwing juicy ones around the garden, while she takes cover in the shed. Meanwhile, Dylan dreams up dishes like worm spaghetti and thinks there's little more amusing than hiding a few in her handbag.

Phobias are common - in the last few days, I've had various comments from followers admitting to a dislike of moths, spiders and the like. They differ from rational fears in that we know they're unfounded. For example, I would be scared if I found a tiger in my bedroom - that's rational because it might eat me!  But I'm not (irrationally) worried that if I went upstairs now, there'd be one lurking in the ensuite.

Thankfully, I don't suffer from nature terrors - unless you count acute embarrassment at the prospect of dancing in public. I'm wary of horses and cattle, but that's not phobic in the true sense. And I wouldn't want to eat slugs, but again, that's not the same as considering birds to be the dead reincarnate. In fact, I often spend time imagining what small animals would be like if they suddenly grew - as a friend said to me recently, imagine a six-foot stoat!

I was about to end this post by asking what your fear or phobia might be. But then I remembered my stroll with Jane last night - we were passing a wooded area of town and she admitted, I wouldn't like to walk here alone. Neither would I, and it put me in mind that the animal I most fear, irrationally or otherwise, is my very own species.
Posted by The bike shed at 1:00 AM