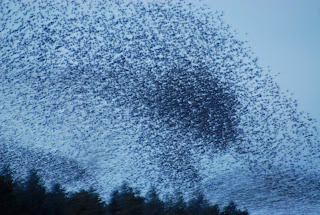 After yesterday's post about phobias, I was talking with my colleague (the one who's frightened of birds), telling her of the starling roost near my house. At least they're at a distance, she said, making those fancy patterns in the sky. So I began to explain that at Plumstone...

She cut me off; couldn't bear to hear more.

But as you don't share her fears, I thought you might like a short extract from my forthcoming book. It's taken from an essay about the roost and I'm describing why Plumstone is so different to other roosts.


If I describe the starlings to friends the response is always similar. There is mention of their flight, the swirling forms; comparisons to kaleidoscopes, oil on water, even Disney’s Fantasia. It seems we are fascinated by their synchronicity; the apparently random yet tightly choreographed swarming, the swoops and falls and joy and delight of it all.
And most have a story to share. We’re aware of starlings gathering in cities, under piers, on marshes and reed beds; one colleague talked of the flocks she’d seen on the American Plains. Starling roosts are a seasonal staple of television shows like Spring Watch and Countryfile. On the Somerset Levels, they are promoted as a tourist attraction.
Yet when I listen to these reports they don’t resonate.  It took me a while to realise why, though the answer should perhaps have been obvious. We tend to view starlings from afar. Indeed any description of the swarming presupposes we are at a remove.
What I so loved about Plumstone was the opposite.
To visit the roost that winter was to be amongst the birds. At Plumstone the starlings fly over your head; on a heavy night, they will literally touch your hair. There will be hundreds by your feet, on the wires and fences, more on the barns and hedges – drinking from pools, chattering on perches, flushed skyward by the raptors. There’s a pair of resident goshawks that make their kills above the wooded break; a peregrine once stooped yards from where I stood, barrel rolling to clasp its prey from below.
Then there’s the stream of chatter and the overpowering stench of guano. Three months of a million plus birds and the copse stinks of sweet lime. If I walked in the trees I could stand under the roost, the sky reduced to starlight by the bursting branches, my boots sticky and my coat peppered with droppings...
Posted by The bike shed at 1:00 AM