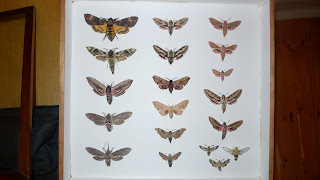 A collection of British moths


As boys, my brother and I would go hunting for moths. We used homemade nets and would roam the avenues by our house, lurking under street lamps and looking for tell-tale flickers. The moths would gather most near midnight, and we'd make our way to the railway station where the bulkhead lights cast a glow over beds of nettles and convolvulus.

You'd never see that now: two boys in duffle coats, walking the streets with nets and jars. But I'm glad I was allowed because for me it began a fascination with travelling at night that I love still. There's a tension to travelling in the dark, an alertness that's akin to what nocturnal prey must feel - for though it was me that was hunting the moths, I've always felt more like the hunted.

Perhaps that's why we caught so few. But we did learn a lot about their behaviour: how they spiralled, which would fall to ground, what conditions were best and when not to go at all. In August there'd be hundreds of yellow underwings, once we caught an elephant hawkmoth, and we discovered larvae of the willow hawkmoth nocturnally feeding night in the trees of Belsay Gardens. We even smeared rum-laced treacle on the trees to see what would be feeding next morning.

There are 800 species of larger moths in the UK, about 2400 if you include the 'micros' - this compares to about 60 butterflies, and explains why most lepidopterists soon turn to the night. And you'd be wrong if you thought moths were all dull and brown - indeed, the bigger ones are more spectacular than butterflies - papillon de nuit the French call them, and they are right. They are right too, in that there's no absolute distinction from butterflies - taxonomically, they are all of one lineage.

By the time I was a teenager I had a moth trap - its actinic tube emitted an ultraviolet glow that would attract hundreds more than a street lamp. It's not the brightness to our eyes that matters, but the colour on the light spectrum - have you noticed there are much fewer moths around lampposts these days? That's because most street lamps are now yellow, one of the least phototactic colours to insects. You'll see more moths in your headlights than you would by walking the streets. 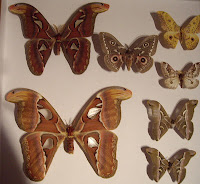 In my mid-teens I started to make money from my interest - I'd buy eggs of exotic silk moths (Saturniidae), feed the larvae, store the cocoons and breed the adults in cages I made from net curtains - then sell the hundreds of eggs at a profit. Forty years later I still receive newsletters from the Exotic Entomology Group - and as an aside, if anyone's thinking of rearing some caterpillars with their kids, silk-moths are way easier and more spectacular than butterflies. I bought my boys some moon moth cocoons when they were toddlers - I remember them crouching by the cage, awestruck and whispering, as the adults emerged and their pale wings filled with fluid, expanding to a six-inch span, the long tails twisting below.

Moths are possibly the most ignored of the major creatures we could easily observe. Most of us get a thrill in recognising wild mammals - (though as a challenge, see if you can name twenty different British wild ones without getting into subspecies; it's much harder than you think) - birding is hugely popular; plants and trees (ok, not creatures, but you know what I mean) too. There are more beetles than moths but the identification is tortuous and frankly they are hard to find - similar problems apply to spiders, wasps and ants. Yet in most gardens, you could almost certainly record a hundred moths; they'd be there most of the year too, feeding and breeding and flying to your window - butterflies of the night. 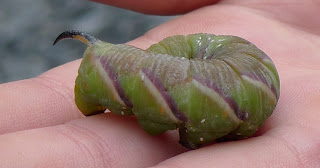 Hawkmoth larva
Posted by The bike shed at 1:00 AM

Labels: About me, memoir, Nablopomo 2011