A midway guide to Mid Wales 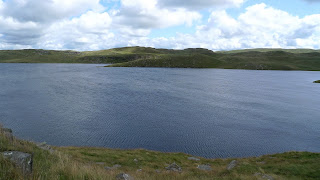 The Teifi Pools
Almost any guide to Wales will inform you of the better known highlights, most likely illustrated with atmospheric photographs and a suggested walking route. The trouble is, you probably know of them anyway: Crib Goch on Snowdon, Cadair Idris, the Wye Valley walk, Conwy Castle; I could list dozens more and you'd not be surprised.

On the other hand, if the guides were full of remote and secret places where you can bivvy in an open ditch, then that wouldn't be much use either - at least, not for those of us with families, looking for somewhere that's away from the crowds, but not requiring a ten mile yomp.

What's needed then is something between the two, a guide to the special places that are easily missed, but just as easily discovered. And in twenty years of travelling in Wales, I've developed my own list of favourites - they are geographically biased to the mountains and coast, and some of them require a little effort - but overall, they are relatively easy to access and just that little bit different. My first selection comes from Mid Wales, an area that gets scant attention even in the most comprehensive guidebooks.

Abergwesyn common is owned by the national trust, it lies to the west of the Brecon Beacons, near the town of Llanwrtyd Wells and access is by the mountain road to Tregaron. This is picnic country par excellence: set yourself down by the cascading pools of the Avon Irfon, let the kids go play as you lie back in the sweet soft bracken and look for kites in the best glacial valley in Wales. Afterwards, drive over the devil's staircase, round the Llyn Brianne reservoir, stop at the pub in Rhandirmwyn (good campsite here too) before making your way back to Llanwrtyd.

Not far from here is the delightful town of Llandeilo - over the last fifteen years, it's gone from rather down at heel to an understated shabby chic. There are enough cafes and boutiques to keep the shopping demons at bay, but it's three castles in a day that I want to suggest. Carreg Cennan is perhaps the most scenic in Wales, a showpiece of Cadw and deservedly so. But the castle at Dinefwr is more overlooked by the guides and especially so is Dryslwn, situated a few miles down the valley on a perfect tump -  entry is free and it's the sort of place to let your kids run wild and tumble down the hill while you enjoy the gentle bends of the Avon Tywi at the end of a classic day out.

Wilder still are the Teifi Pools, high in the Elenydd, fifteen miles east of Aberystwyth, they are surprisingly easy to access. I'd wanted to go there for years and in my case, I backpacked in from Rhayader - it's also possible to take a spectacular mountain bike trail around the Claerwen reservoir. But most people will simply park at the lay-by and walk the few hundred yards to the first of these glacial mountain lakes - though when I say most, you'll meet perhaps half a dozen others on a busy day. Strata Florida Abbey is not far away if you want to add to your day - or drop in for a cup of tea at the Claerddu bothy (pic to left - it's only four hundred yards from the road but you'll need to find it on the map).

Last pick is not strictly in Mid Wales, but I'm going to include it anyway. Henhryd falls is where I took Jane on our first date. It's less well known than those at Ystradfellte, but I like it more - not least because I kissed her behind the screen of water that soaked our hair and she didn't pull away. The falls, one of the highest in Wales, drop into a pool that wouldn't be out of place in Lord of the Rings - great in winter too when the icicles hang from the cave and the hoar frost clings to every branch. 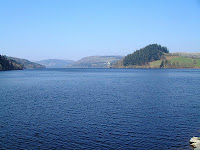 I could list more: the Doethie valley and Twm Shon Catti's cave; the B road from Rhayader to Llangurig, the ancient mines at Cwmystwyth, the Clywedog River and the Staylittle Pass, the dawn Chorus tour at Lake Vyrnwy (see left) ...


But I have to stop somewhere, and I'd hope I've said enough to fire your imagination.