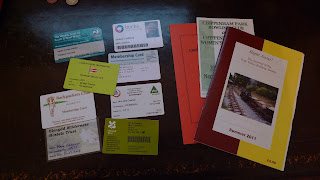 I'm not sure that I can accurately describe my 'memberships' as a collection, but when I counted them up the other day it began to feel that way. I like to support organisations that I think are doing some good and if that involves a membership card and a quarterly magazine I am easily swayed. With direct debit payment, they tend to hang around too, so it's possible after writing this post that I'll do some culling.

I didn't join the National Trust until about five years ago - I suppose I thought it was a bit on the aristocratic side, and then there was all that fuss over hunting on its land. But politics aside, the Trust is one of the great protectors of our landscape; I can take or leave the stately homes, the gardens I enjoy in a gentle sort of way, but its the wild places the Trust cares for that I value most. I'd join the National Trust for St David's Head alone - as it is, the Trust owns 600,000 acres of land and 500 miles of coast, in addition to its hundreds of gardens and properties.

The Wildlife Trusts do something similar but with an emphasis on conservation of nature. I'm a member of the South and West Wales Trust which manages 90 wildlife reserves including Skokholm and Skomer Islands, famous for their puffin, seal and shearwater colonies. Not linked, but relevant to wildlife I'm in the Amateur Entomologist Society and the Exotic Entomology Groups too.

The Elenydd Wilderness Hostels Trust was set up to rescue two of Wales' finest hostels - Dolgoch and Tyncornel in the Cambrian Mountains. These are some of my favourite places anywhere; yes, they can be full of grouchy old farts who talk of the golden days of hosteling - but to my mind they're right and I'm unashamedly a supporter. Shame on you Youth Hostels Association for trying to sell them in the first place!

That said, I still pay my YHA subs each year - and recently applied for the 'over 50s Group' - oh, I so enjoyed being able to do that! I could write for ages about the YHA, but its original aim of providing simple accommodation, accessible to all and giving wide access to the countryside, remains highly relevant today - and for all I despair at some of its policies, at heart, I am a supporter.

If I'm not staying in a hostel I could be under canvass with the Camping and Caravanning Club, or pitching in the mountains with the Backpackers Club. There are six mountain bothies in Wales and though membership is not a requirement of using them, the Mountain Bothies Association is a worthwhile body. There are many people I know who don't 'get' the idea of these wild shelters, who jest or shudder at the very idea - but the times I used them, on trips with my eldest son, are days and nights I'll never forget - fabulous places and all thanks to volunteers.

Then there are the local clubs: the boat club, the cycling club, the local gym, the steam railway- I'm even in the bowls club, though only a social member because of its rather good bar. And there are intermittent memberships, such as the Austrian Alpine Club, that I have let lapse but will renew if I go to the Alps next year. I surprised myself when I realised I'd let my Welsh Canoe Association membership lapse too - I was its Chairman for a number of years.

I suppose with all these memberships - and this is only a selection of my outdoor-related ones - there is some overt value that could be attached: free parking, reduced entry prices, shop discounts, that sort of thing. But with the exception of the National Trust, I don't think about this much - and even in that case, it's only to recognise the astonishing value we get from our family membership. This year, I calculated that to pay for individual entries to its properties would have cost us over £500.
And I've just realised that I have a whole list of cyber memberships too, all of them free - blogging ones, writing ones, philosophy ones - and of course, Nablopomo, which, depending on your interest, you can blame or thank for my ramblings this month...

...actually, now I mention rambling, I'd been thinking about the Rambler's Association and their campaign for better access. Enough!
Posted by The bike shed at 1:00 AM