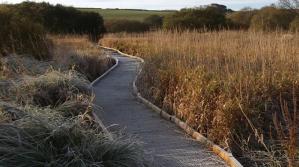 When the boys were small we'd search out and be prepared to drive long distances to enjoy walks that were buggy friendly. It was how we found the Newport estuary and the cycle path at Neyland that I wrote about the other day. Good access, a reasonable track and enough to keep the kids interested was all we wanted - but in Pembrokeshire that can sometimes be hard to find. So it's surprising we never discovered Llangloffan Fen, for it's only a few miles from our house.

Or perhaps it isn't - surprising that is - for in Pembrokeshire, all eyes are fixed on the coast, and the fen, being inland of the Fishguard to St David's road, is on the wrong side of the scenic divide. Even up close, it's one of those places you barely notice: a no man's land of scrub and mire that you vaguely understand is what's beyond the hedgerows you're passing on the way to somewhere else. 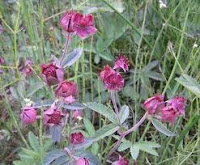 But recently, the fen was in the news. The West Wales Wildlife Trust had improved the boardwalk that gives access to what is essentially a glacial floodplain, a new bird hide had been installed and there was talk of otters in the reed beds.  So the other week we took the unclassified lane from Castle Morris to Llangloffan wondering what we'd find.

And in truth, on a showery day in October there wasn't a great deal on show. Put perhaps like fishing, when you don't have to make a catch to have a great day, we thoroughly enjoyed our discovery. There were dragonflies of course, darters and the odd hawker - and we could hear many birds, the trees were gnarled and covered in lichen, some huge fungi, plenty of grasses and ferns. There were wildflowers too and though these aren't my strong point there would be much to see in summer, a highlight is evidently Marsh Cinquefoil.

The reserve is best known for its warblers (sedge, grasshopper and reed) and there have been sightings of corncrake, water rail and quail; it's a stronghold of owls and hen harriers too, and of polecats, badgers, voles and shrews. We saw none of these, though I'm sure they're there in numbers. Even on a good day, I suspect it's one of those places that you spot only a few species. 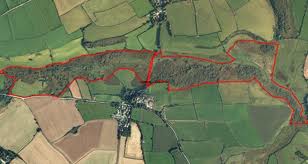 But what I liked most, was the sense of remoteness - the boardwalk is perhaps a couple of kilometres in length, and it takes you directly into the reeds and woods. Within a hundred yards you're right in the bog, and there are these oddly protruding islands of sedge grass that tussock between stunted shrubs. It feels ancient (which it is) and special (which it is too) and yet it does it in a very unspecial way.

The fen is a mire, a low trough between two slight rises in the surrounding landscape, cutting you off from the familiar landmarks - there are no roads, so it's silent, other than the trickle of the water, the call of the birds and the creaking of your foot on the boards.

You might get that sense that I thought the fen was less than spectacular. And you'd be right - but that's also its delight. It was one of the places that you know you'll go back to; that will always, in a quiet way, have something to offer. The irony is that for over ten thousand years people have been passing it by - and that's precisely why it's so worth visiting today.
Posted by The bike shed at 1:00 AM