A pocket book of flowers 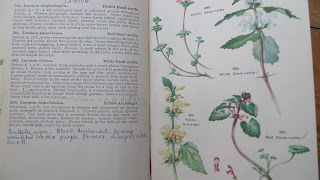 I went to my local car boot on Sunday.  How much for the little green book? I asked a trader. He wanted a quid; I offered fifty pence and we agreed to split the difference.

What I'd bought was a pocket book of flowers - or more accurately, A Flower Book For The Pocket, by Macgregor Skene, Professor of Botany at the University of Bristol. It's one of those beautifully illustrated field guides that  became popular in the Forties as printing techniques allowed for cheaper reproduction of colour plates. The book is quite scholarly by today's standards, though it's written with real skill which makes the taxonomy accessible to the layman - a style that was later perfected by the Wayside and Woodland series and their ubiquitous cousins, the Observers Books.

This particular copy was bought in 1943 and it cost someone ten and six. I know that because there's a price mark on the first page and an inscription that reads:


To E from W.
When WE went NW.
August 43.
E has written her name, E M McGarry, on the inside leaf. I suppose E could just as easily be a 'him', but the writing looks feminine so I'm going to presume otherwise - not that it matters.

Whoever E was, she was a diligent botanist, ticking and dating the illustrations, noting any variance to the description. Common Hemp-nettle, she observes, is taller than described and Hedge Woundwort has solid not hollow suckers. She's added details of flowers and variants not included the book, commented on the accuracy of the illustrations, and my favourite, noted that 'high heathland' would  be better defined as 'heights over 1500 feet'.

In '44 E saw a Hemp Nettle at St Brides Major (all her dates use an apostrophe). That same year she recorded a Marsh Gentian in Norfolk, Knotgrass in Cornwall and Water Avens at Borrowdale. Between '43 and '45 she includes sightings from Cambridge, Dartmoor, Stonehenge, Salisbury,  Ogmore, Cowbridge, Exmoor and Suffolk. On a few occasions she's picked flowers and pressed them between the pages, their impressions still there after sixty years.

Reading her notes, it's possible to create a fictional portrait of E. From the frequency of the place names I'd say she came from the West Country, and she must have had transport to travel so far and so frequently. Remember, all this took place during the Forties, so presumably she was well off, and by the look of things, well educated too - her handwriting is beautifully formed and the accuracy of her notes indicates more than a keen amateur.  As for who W was - her companion on that trip to the North West - a lover perhaps, or a sister?

I love these old books, and to me they are enhanced by the notes and jottings of a past life. I have a copy of the Wayside book of Dragonflies that includes handwritten lists of species seen in Wiltshire over many years, there is even copies of the owners correspondence with the book's author.

To a collector, books that have been marked are often devalued, the descriptions on ebay will typically say 'some scribblings and notes throughout' or 'considerable wear and pencil markings'. What they don't say is, the book includes a life that took joy from nature; someone, who in the midst of a World War, stopped to record the flowers she saw.

Those recordings stop abruptly in 1947. What happened to E after that I wondered? The notes gave me no clues. Until that is, I turned to page 353 - almost the last of the book - and there was that same handwriting, this time in biro,  underlining and ticking Bladder Sedge, with the note Bratton Fleming ' 97.

I like to think that E lived a long life, that she had many books like this - that perhaps she turned to an old copy to remember W and reminisce about those trips to the Lake District and Cornwall.  Bratton Flemming is on the edge of Exmoor - not quite 1500 feet about sea level. I wonder if she's buried there, and what flowers grow on her grave. 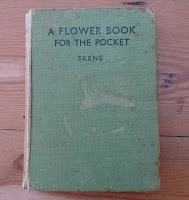 Labels: About me, Books, Nature, Past lives