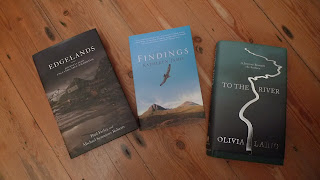 It's a while since I've written a books post, and meanwhile I've read so many that I'm going to chose carefully. I'm also going to try (and no doubt fail) to tread carefully because there's a certain unease in reviewing a selection of 'new nature' books, when you're soon to publish something akin to it yourself.

I'm not sure there's a sustainable definition of 'new nature' writing. But for now, let's assume its signature is a mix of person and place: 'new nature' goes beyond mere description to include the author as central protagonist; it's as much a personal as a geographic journey. A couple of years ago Granta  published an edition dedicated to the genre, including pieces from some of its high priests, notably Robert Macfarlane (The Wild Places, Mountains of the Mind), and Roger Deakin (Waterlog, Wildwood, Notes From Walnut Tree Farm).

Also included in that Granta selection was Kathleen Jamie, whose book Findings is a collection of essays based largely in the Scotland Highlands. Jamie is a poet and, as with many of the new nature writers, her command of language is enviable. The book starts with Darkness and Light, an amiable enough essay that moves between islands and mainland, churches and shopping malls, before settling on the ancient tomb of Maes Howe. It's a promising introduction, with hints of the reflection and observation that makes for good nature writing.

The trouble is, not much more follows; each subsequent essay (on peregrines, salmon, corn crakes, skylines, even Surgeon's Hall ) left me increasingly dissatisfied. Exactly what was she trying to say, I wondered? And in the end, I concluded, 'not a lot'.  That's a touch harsh, and there will be those who'll delight in her lyrical skill, but ultimately I wasn't sad to put the book down. I had to reread sections to remind myself for this brief review - never a good sign.

If I found Jamie's book disappointing, then Olivia Laings, To The River, was doubly so - at least on first attempt. And that, after I'd heard her talk at a local literature festival and rather liked her. The book describes a week-long journey down the Ouse in Sussex; it's the classic 'new nature' blend of  observation and personal story, padded with lots of research material - the Ouse is famous for the death of Virginia Woolf, the Battle of Lewes, Henry III and various other historical and literary connections which Laing weaves into the progress of her journey. The trouble - and I accept that others might take a different view - is that this deviation from the immediate experience is what I so dislike and mistrust about much of the 'new nature' genre.

In, To The River, Laing uses the landscape as a stage to display how intelligent and well read she is - a form that's been perfected by writers like Macfarlane (who coincidentally wrote the cover puff for the book) and Deakin. The trouble is, I don't care! And I'm not very interested in Virginia Woolf or Kenneth Grahame or King Harold - and if I were, I'd look them up elsewhere; probably in the same books that she did. What I'm interested in, is Laing's journey, her relationship with the Ouse, her perceptions of the river and her response to the wider landscape. I recognise that, at times, this might include her interest in Woolf or history or whatever, but for me, the balance is all wrong - and frankly, it doesn't ring true.

After abandoning the book I returned to it a few weeks later, and in fairness, if I skipped through the research material I began to enjoy her writing. Laing walked the Ouse having broken off a long standing relationship, and as her journey progresses the river becomes a metaphor for what she has lost, but also for new possibilities; for the sense that our past is always part of our present. And to my mind, this is the territory in which she is strongest, and of which I wanted to read more - she is also a fine observer with some echos of Annie Dillard in her writing. To my surprise, I found myself rather sad when she and the river had reached the sea.

The third book in this nature selection is the much lauded Edgelands, by Paul Farley and Michael Symmons Roberts. It was a book I'd looked forward to reading. Their idea was to explore those landscapes we often disregard - the railway sidings, car parks, industrial scrublands, derelict canals and brown field sites that fringe our towns and countryside - it seemed full of possibility. Sadly, the outcome is one of the most dreadfully pretentious books I've ever picked up. Strong stuff, but if Laing typifies the tendency to use the landscape as an excuse for other material, this book takes the concept to a new level. Behold the Emporer's new clothes!

This isn't a book, as its sub-title claims, about England's lost wilderness; it's a book about Farley and Roberts and how smashingly literate and clever they are. I don't believe for a moment that they have spent much time in the 'edgelands', and certainly not before they researched this nonsense. I have an image of the two of them wandering round a Midlands scrapyard on a drizzling Saturday, trying desperately to imbue some meaning before the rain comes on.. 'This reminded me of Yeats,' says one. 'I was thinking, TS Elliot,' the other replies...  at which point they nod and rush to their car as a group of yobs hurl stones in their direction.

Beyond it's over intellectualising, Edgelands also suffers from a peculiar format, in that it is two authors writing as one voice - evidently this was a conscious decision. The consequence is that there is never mention of 'I' - all observations are at a remove, deconstructed, extrapolated... For me, who comes from a Romantic tradition - who believes that our response, if it is true, will connect with others - this is a singular failing. Arguably, it takes the book outside the 'new nature' tradition, and given that I regard Edgelands as one of the silliest books I've read in years, I'm not sad about that at all.

After those three selections I was feeling a touch dejected. So let's concude with some old nature writing and two books which after I'd finished them, put me in a brighter frame of mind.

Robert Lockley's Letters from Skokolm is exactly what the title says - a series of letters to his brother in law John Buxton (also an excellent nature writer), written during the War. Skokholm is a bleak little island to the south of Skomer where Lockley made his home as a crofter in the Thirties. The letters give an intimate picture of Lockley's life there, of the birds and other wildlife, of his love of the place, his delight in the wild. The writing is not brilliant, at times the letters are repetitive, the images and words a little staid - and yet it reads true. It's not an vehicle for cleverness, just an honest story, simply told. 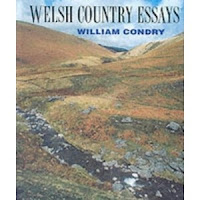 And lastly, William Condry's Welsh Country Essays. I'd long known of the late Bill Condry, the former Guardian nature diarist, but hadn't read many of his essays. These are the stuff of brilliance: sharp and heartfelt, deeply rooted in the landscape and beautiful in their simplicity. Condry is the George Orwell of the natural world - watching, wondering and gently educating as describes what he finds, and how it makes him feel. His writing is the sort that makes you pause for breath as well as thought. There's little if any research material in these essays, just a deep knowledge of Wales and what it means to be close to a land he loves. Utterly believable and absorbing. It cheered me up no end.
Posted by The bike shed at 9:05 PM